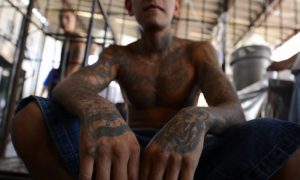 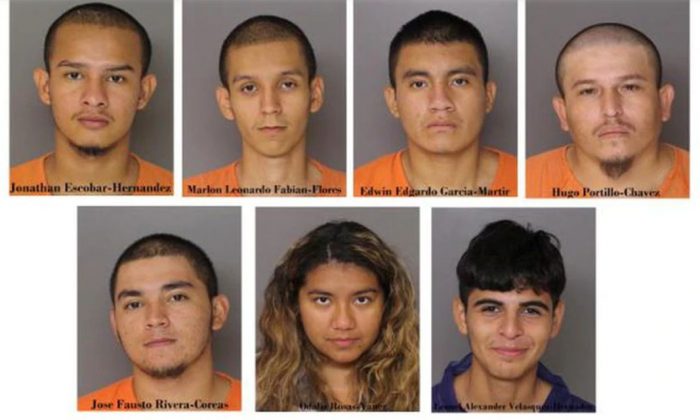 Seven suspects have been charged with first degree murder in the death of Daniel Alejandro Alvarado Cuellar. (Baltimore Police)
Crime and Incidents

Maryland authorities said they have arrested three more suspects—in addition to seven already in custody—with alleged links to a gang-related slaying in June.

All 10 suspects are believed to be associated with the MS-13 street gang and face various charges in connection with the murder of 21-year-old Daniel Alejandro Alvarado-Cuellar, who was found stabbed to death.

Investigators cited by The Baltimore Sun said that the slaying stemmed from a war between MS-13 and the rival 18th Street Gang.

“The victim had been seen making a hand gesture that was believed to be indicative of an affiliation with the 18th Street,” detectives wrote, according to the Sun.

The killers stalked Cuellar in Towson on July 30, the report said, before ambushing him in his home and stabbing him to death.

The three recently arrested suspects—and the seven previously taken into custody—are all being held without bail at the Baltimore County Detention Center, police said.

All 10 could face life sentences in prison.

An Immigration and Customs Enforcement (ICE) official said that some of the suspects arrested for the slaying of Cuellar are illegal immigrants.

An ICE official told Fox News on Sunday that six immigration detainers were issued for six of the initial seven suspects. The spokeswoman said that six of the seven are in the United States illegally and are members of MS-13.

MS-13 is particularly active in Maryland, but its gang activity is centered around the Washington suburbs.

Months before that, five MS-13 members were arrested for the slaying of a 16-year-old MS-13 gang member. He was found stabbed more than 100 times.

Several weeks ago, an MS-13 gang member who once was on the FBI’s top 10 list of most-wanted fugitives, received a 25-year sentence for killing a man on behalf of the gang and agreeing that a conspirator would commit multiple violent acts, according to The Associated Press.

A 2013 indictment charged Gomez and another man with the fatal beating and stabbing of a fellow gang member suspected of associating with a rival gang in Plainfield, New Jersey. According to the FBI, the victim’s throat was slit, he was struck in the head with a bat and stabbed 17 times with a screwdriver.

Gomez’s accomplice was convicted of the crime.

Gomez fled New Jersey but was captured in northern Virginia in 2017.