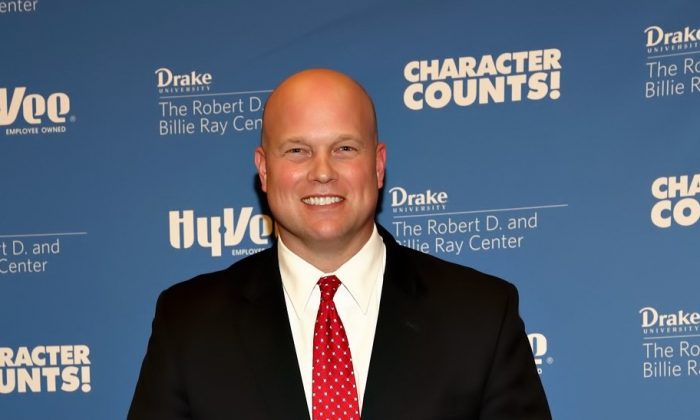 Acting U.S. Attorney General Matt Whitaker has been on the job less than a week after taking over for former Attorney General Jeff Sessions, but he’s already facing a legal challenge to his new role.

In a motion filed in Maryland federal court on Nov. 13, the State of Maryland is seeking an injunction to Whitaker’s ascendancy, arguing that a constitutional clause makes Deputy Attorney General Rod Rosenstein the rightful successor to Sessions.

The clause states that the president “shall nominate, and by and with the advice and consent of the Senate, shall appoint ambassadors, other public ministers and consuls, judges of the Supreme Court, and all other officers of the United States.”

The operative phrase there is “with the advice and consent of the Senate,” argues the state, which has asked Judge Ellen Hollander to make the judgment in an unrelated case on the Affordable Care Act. Sessions is named as one of the plaintiffs in that case, and Maryland says it can’t go ahead with it unless the rightful attorney general is named, which it believes is Rosenstein.

Trump appointed Whitaker, who was Sessions’s chief of staff, on Nov. 7 after Sessions stepped down at the president’s request.

Democratic and some Republicans members of Congress have warned that putting Whitaker in the top law enforcement position would compromise the Mueller investigation, which Whitaker has been critical of in the past. They fear that Whitaker will take over for Rosenstein, who appointed Mueller to look into possible Russian meddling, and in an August 2017 memo, laid out the scope of the investigation.

While Rosenstein remains in his current position, it has been reported that Whitaker might assume authority over the special counsel investigation.

When asked if he expected Whitaker to get involved in the investigation, Trump told reporters Nov. 9 that it is up to Whitaker.

A Department of Justice (DOJ) spokesperson said that Whitaker is “consulting with senior ethics officials on his oversight responsibilities and matters that may warrant recusal” from the Russia investigation, reports USA Today.

The City of San Francisco, which also has lawsuits naming Sessions as a plaintiff, has warned the DOJ that it will take legal action if the department doesn’t provide a legal justification for the president’s appointment of Whitaker.

“At no point in his Justice Department tenure has Mr. Whitaker been confirmed by the Senate. That appears to be unprecedented for someone serving as the country’s top law enforcement officer,” San Francisco Attorney Dennis Herrera said in a statement. It’s not clear that the case has precedent, which would put it in a legal gray area.

Trump appointed Whitaker under the Federal Vacancies Reform Act, which allows the president to appoint a senior DOJ official to serve as an acting attorney general so long as she or he has already served in a high-level position for 90 days. Whitaker does fulfill that requirement.

Further, Trump issued an executive order last March that lays out the line of succession if Sessions were to leave. It assumes that the deputy attorney general would succeed the attorney general, as long as he or she satisfies the Federal Vacancies Reform Act. It also gives the president authority, “to the extent permitted by law, to depart from this order in designating an acting Attorney General.”

The executive order hasn’t yet been challenged.