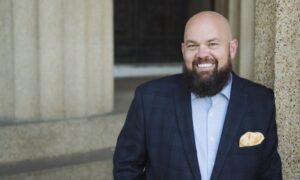 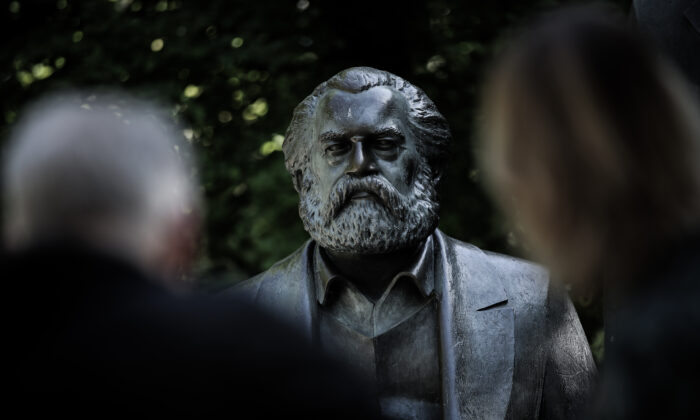 Visitors look at a statue of Karl Marx in a public park in Berlin, Germany, on May 4, 2018. (Sean Gallup/Getty Images)
Viewpoints

Marxism in America: The Culmination of a Decades-Long Movement

On Aug. 8, I watched “Life, Liberty, and Levin” on television. My longtime friend and former colleague Paul Kengor was one of Mark Levin’s guests. The focus of the show was Levin’s new book, “American Marxism.” Kengor is a leading Cold War historian, an expert on Marxism, and a prolific author.

The brilliant pair discussed how ubiquitous and ferociously aggressive Marxism is in today’s America.

What we’re witnessing is the culmination of trends that have been in place for at least a century. My first book, “America’s March Toward Communism” (Libertarian Press, Inc., 1987), reviewed the great extent to which most of the principles contained in Karl Marx’s 10-point platform for how to socialize an economy (spelled out in “The Communist Manifesto”) had been adopted as official policy in the United States. While I have had readers in the decades since the 1980s express amazement at how I saw the patterns “way back then,” I don’t feel I was at all prescient.

Actually, I’m amazed that what I wrote wasn’t common knowledge then, because the domestic policies that have gradually implemented Marx’s agenda had been in plain sight for decades.

I provided a couple of brief updates on the status of the 10-point platform when Barack Obama was president. Not surprisingly, given his ideology (his mentor had been the card-carrying communist Frank Marshall Davis, about whom Kengor has written the definitive biography), Obama’s administration pressed ahead on all 10 points. I found the two most alarming to be the expansion of power wielded by the Federal Reserve (Plank No. 5 in Marx’s platform is to centralize credit under the control of government) and the increasing centralization of control over education in Washington (Plank No. 10).

Nothing that has happened in the eight years since I wrote those updates has changed my mind. The Fed continues to debase our currency and enable Congress’s unconscionable runaway spending by essentially practicing Modern Monetary Theory. And the education establishment, which already has been committing gross professional malpractice against our children such as by causing serious emotional distress by cramming “climate change” ideology down their throats, now wants to continue to abuse children and bash America using critical race theory. (Levin’s new book, by the way, includes ideas on how to thwart the educrats.)

I believe the threat to our children is the most pressing of the many Marxian-related threats we face. Two personal anecdotes: 1. When I returned to college nearly a half-century ago to earn a teaching certificate, even back then I was taught little about pedagogical techniques but subjected to much fuzzy collectivist preaching. 2. A friend’s brother held a high rank in the Michigan Education Association teachers union. He firmly believed parents should have no control over what and how their children are taught. Instead, he believed that professional educators should have monopoly power over this crucial activity.

Think of this in the context of President Joe Biden’s push for universal pre-school—especially in light of the recent Harvard research showing that preschool is often counterproductive and developmentally inappropriate, causing needless emotional problems and resulting in a huge increase of children having to take drugs.

What’s most important to understand about Marxism in America isn’t just how advanced the economic agenda of Marxian socialists is. The proposed Green New Deal is an elaborate blueprint for a command economy—one with top-down central economic planning. Indeed, some form of socialism is the primary goal of the government-sponsored “climate change” offensive.

As dangerous as the Marxian socialist agenda is, Marxism extends far beyond the realm of economics. The Marxian virus has infected all the major cultural institutions in our society—church, law enforcement, media, entertainment, schools, corporate America, etc. Churches, for example, often have a view of “charity” (actually, wealth redistribution) that has more in common with Marx than the Bible. The Italian communist Antonio Gramsci’s strategy for infiltrating every nook and cranny of our culture has reached fruition in the leftist “defund the police” movement and in the poisoning of young minds with hatred and negativity toward their country.

And then there are the “woke” corporations, such as Major League Baseball, joining in the effort to silence those who aren’t on board with the partisan socialist agenda.

All these cultural inroads have been going on for a long, long time. Ludwig von Mises, the economist who proved a century ago that socialism was inherently unviable, described a rampant anti-capitalist mentality in his 1956 book, “The Anti-Capitalist Mentality” (available from the Mises Institute (pdf)). The aforementioned Kengor wrote a detailed book titled “Dupes” that documented many cases of American public figures becoming either conscious or unconscious spokespersons for Marxian causes.

Levin does something in his new book that I wish I had done in my 1987 book about Marxism. My book contained recommendations for three constitutional amendments. While I still think we need those amendments, I acknowledge that getting a constitutional amendment passed is a Herculean task and not very likely. By contrast, Levin gives examples of steps that Americans can take today to push back against Marxian initiatives at the local level. These are not pie-in-the-sky reforms, but practical steps within the capability of virtually every citizen willing to push back against Marxian aggression. This is what we need: practical, achievable steps.

Despite the Marxians’ best efforts, freedom in the United States isn’t extinct yet. If we each will invest just a modest amount of our free time, we can successfully push back against the aggressors and preserve liberty for future generations.