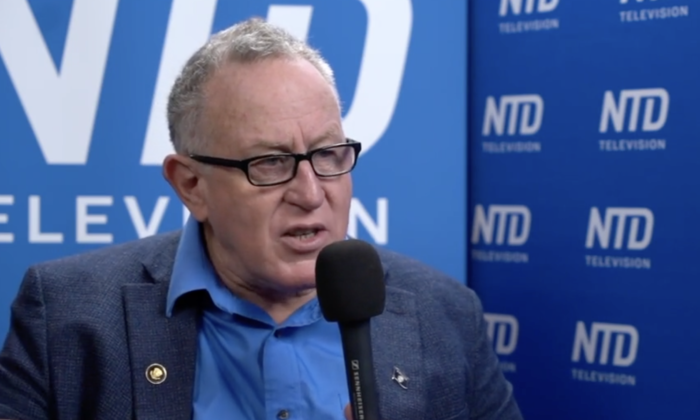 Trevor Loudon in an interview with NTD's Capitol Report. (NTD/Screenshot via The Epoch Times)
Big Tech, Censorship, and Socialism

Marxism Hidden in Many Forms in US: Trevor Loudon

During a recent TV interview, Trevor Loudon said that Marxism is “extremely widespread” in the United States, and is embodied within so many forms, such as Black Lives Matter, critical race theory, the LGBTQ movement, the environmental movement, or pushing for equity—yet may go unnoticed by the average person.

Loudon is an author, filmmaker, and public speaker from New Zealand. He’s a contributor to The Epoch Times and hosts the “CounterPunch” program on EpochTV.

“Marxism is really the model, the main political-economic paradigm that we live in today. But most people don’t recognize it because they’re still thinking about the old class struggle of the 1840s, in the early part of the 20th century,” Loudon said in NTD’s “Capitol Report” broadcast on Mar. 11. “So Marxism is endemic in our society, it’s everywhere.”

In “Manifesto of the Communist Party,” Karl Marx stated that human history is “a history of class struggles.” Two basic classes oppose each other in the capitalist system: the owners of the means of production, or bourgeoisie, and the workers, or proletariat.

“Where is Marxism? It’s where you find an organized system to identify victims and to overturn the existing structures that allegedly oppress those victims,” said Loudon.

Loudon said the environmental movement is not about the environment but about destroying industry, destroying wealth. The LGBTQ movement is not about strength of the LGBTQ people but about destroying the traditional family. The communist-controlled labor unions are not about strength in the working man but about controlling the working man for the benefit of the state. The vaccine mandates are not about public health but getting control over people’s lives and getting people conditioned to being controlled.

“This is all Marxism,” said Loudon.

Black Lives Matter co-founder Patrisse Cullors once admitted that she and other founders were “trained Marxists,” a video from 2015 showed.

The highly controversial critical race theory (CRT) is also a quasi-Marxist ideology, redefining America’s history as a struggle between “oppressors” (white people) and the “oppressed” (everybody else).

“Critical race theory is just simply Marxism applied to race rather than class. But it’s so obviously divisive. It goes so much against the grain of what America is supposed to be about, E Pluribus Unum, out of many [states], one [country],” said Loudon.

“This is even now extending into pedophilia,” said Loudon. “We’re going to see movements in the future to make pedophilia legal because pedophiles have been oppressed by society. This is where it’s going.”

In recent years, pedophiles have been trying to rebrand themselves as ‘minor-attracted persons,’  to seek legalization of pedophilia.

Last November, Allyn Walker, a professor at Old Dominion University in Virginia, agreed to resign from the school, when the contract ended, for remarks referring to pedophiles as “minor-attracted people.” Walker, who identifies as nonbinary, wrote a book on “minor-attracted people” and detailed their “pursuit of dignity.”

“All of these programs are designed to weaken America, weaken the West, weaken our traditions, weaken our families, weaken our governments, weaken our religions. So the whole lot can be overturned and replaced with a communist-socialist regime.”

The reason Marxism is hidden in different forms is to deceive people, said Loudon.

“Marxism is a hard sell. A revolution is a hard thing to sell to people. You got to sell it as something different than what it actually is.”

When Lenin took over Russia, he didn’t talk about collectivizing everything, putting people in gulags, or creating a totalitarian state. Instead, he promised that people would have land, peace, and bread, said Loudon.

“Today, it’s sold as equity. What does equity mean?”

In his executive order, equity was defined as “the consistent and systematic fair, just, and impartial treatment of all individuals, including individuals who belong to underserved communities that have been denied such treatment.”

Vice President Kamala Harris posted a cartoon video on her social media during her election campaign in 2020, saying there’s a big difference between equality and equity, and “equitable treatment means we all end up at the same place.”

There’s a big difference between equality and equity. pic.twitter.com/n3XfQyjLNe

Loudon said more people are awakened and the left have lost control of themselves.

“There’s [sic] thousands of people now drawn into the freedom movement that came in because critical race theory woke them up. It was a bridge too far. And I read the left-wing press, and they are just beside themselves over what’s happening here because their game has been blown and they are freaking out about it.”

In a previous interview with NTD, Loudon said Communism had been infiltrating the United State for one hundred years, and people need to get involved “on the ground,” in local elections to save America.