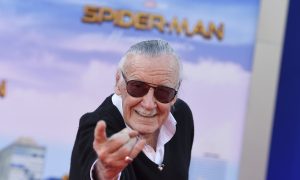 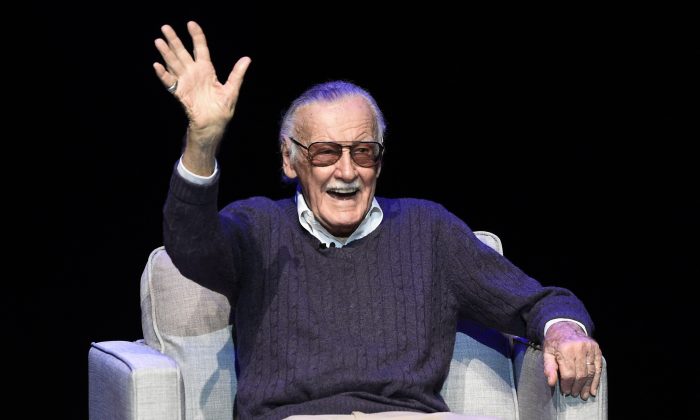 LOS ANGELES—An Army bugler played a mournful “Taps” at a Hollywood memorial for Stan Lee, and military bagpipers sent a solemn “Amazing Grace” into the air.

Standing respectfully around them was another group in its own impeccable uniforms: Lee fans dressed as Black Panther, Wolverine, and other members of the X-Men and Avengers.

It might have been a ridiculous scene on the night of Jan. 30, had it not been a perfect encapsulation of the life of Stan Lee, a World War II veteran who wanted to become a serious writer and instead grudgingly took a job in comic books, becoming the mastermind behind Marvel Comics and co-creator of many of the best known and most lucrative characters of the last century.

“This was a guy who spent his life dreaming of writing the great American novel, and he didn’t realize he was doing it, over and over and over again,” said the night’s host, filmmaker Kevin Smith, a friend and super-fan of Lee. “The world didn’t need another ‘In Cold Blood.’ It needed Spider-Man.”

On a night that had more cheers than tears, hundreds of Marvel fans stood and paid tribute along with Lee’s colleagues, co-creators and friends outside the Hollywood Boulevard theater where he had put his hand and footprints in cement in a similar ceremony 18 months earlier. Lee died in December at age 95.

“Sometimes when I’m feeling sad or I’m upset I would think of Stan Lee and this wonderful universe he’s created,” said Lee fan Isaac Suarez, who was celebrating his 14th birthday. “His soul lives on in every one of us, in every single comic and movie he’s put his life into.”

Tom DeSanto, who as producer of “X-Men” was among the first to find big-screen success with Lee’s characters, said he was astonished by Lee’s global reach.

Across the street was a billboard announcing that a movie whose characters started with Lee, “Black Panther,” had been nominated for six Academy Awards.

“That’s a triumph,” Smith said. “It’s a cherry on the top of an amazing, productive life.”

Smith called Lee “one of the best humans to ever walk the earth,” setting the tone for a night when no one would hold back in their superhero-worship. Speakers and panelists would compare Lee to the pope, Jesus, and the shining light of the sun.

Mark Hammill, a friend of Lee who often worked alongside him doing voices on Marvel animation projects, was among the few to admit Lee had flaws.

“He wasn’t always nice,” Hammill said in a panel discussion. “He’d give you shots. He could be acerbic.”

Chris Miller and Phil Lord, producers of “Spider-Man: Into the Spider-Verse,” which is also nominated for an Oscar, talked about meeting Lee when he was very old yet still bursting with energy and ideas.

“There were thousands of them,” Lord said. “He was a compulsive creator.”

Actor Laurence Fishburne, who appeared in Marvel’s “Ant-Man and the Wasp” last year, described the thrill of spending 12 cents to buy a Lee comic book when he was a child in Brooklyn, New York.

“It opened my eyes to the possibility that you could be more than your surroundings say you can be,” Fishburne said.

The night also featured frequent digs at comedian Bill Maher, who on his talk show last week took shots at Lee worshippers who still read comic books as adults. A big-screen graphic at one point thanked him for bringing comics fans together.

Los Angeles Mayor Eric Garcetti gave Lee a posthumous key to the city, with Lee’ catchphrase “Excelsior!” engraved on it.

The night included much praise for the artists Lee worked with who often go uncredited, including Steve Ditko and Jack Kirby, and just as much praise for Lee’s wife and partner in everything Joan, who died in 2017.

Lee’s only child and heir, daughter J.C. Lee, made a rare public appearance, walking quickly along the red carpet and shouting thanks to fans and reporters.

The night lacked the star power of any of the actors who play members of the Avengers, but made up for it in the number of prominent executives, actors, and artists Lee had worked with.

On the screen inside the theater where Lee’s Marvel movie cameos played between speakers, video tributes came from Dwayne “The Rock” Johnson, William Shatner, and “Luke Cage” actor Mike Colter.

Nearly everyone who spoke did their best impression of Lee’s gravelly voice and northeastern accent. Hammill may have been the best at it when he repeated what Lee said when asked how he stayed so youthful in old age.

“Well Mark,” Hammill-as-Lee said, “I like to get up in the morning and worry very, very hard all day long.”