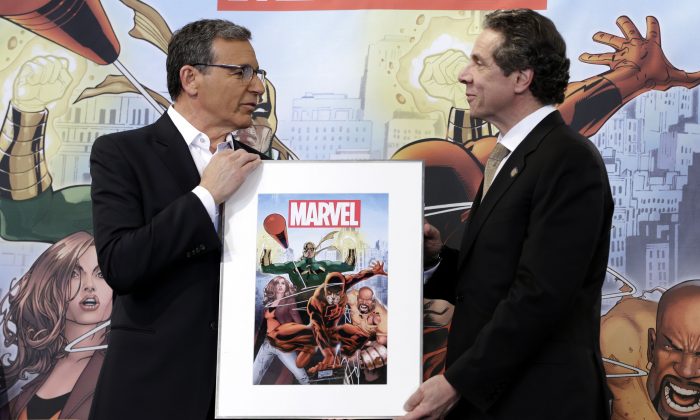 NEW YORK—Marvel Television is set to film a live-action series about the four “Defenders” characters, Daredevil, Jessica Jones, Luke Cage, and Iron Fist. The project is set to bring the “flawed heroes of Hell’s Kitchen” characters to New York City, which will be the principal filming location.

The program, in association with ABC Television Studios, consists of 60 one-hour episodes, including a culminating miniseries event. The state is calling it “the biggest production commitment” in its history.

Gov. Andrew Cuomo, The Walt Disney Company, Marvel, and Netflix Inc., announced that the series is set to stream on Netflix starting in 2015.

Filming of the series is slated to begin this summer.

“New York is where the entertainment industry started, and this unprecedented commitment from Disney and Marvel is further evidence that we’re bringing it back bigger and better than ever before,” Cuomo said in a release.

The governor commended Disney for choosing New York, knowing that the competition for filming locations is fierce, and said the show not only brings the superheroes back home, but also brings “hundreds of jobs and millions of dollars in new business.”

Chairman and CEO of The Walt Disney Company Robert Iger recalled that in 2008, Disney contributed around half a billion dollars to New York’s economy through television and film production, including approximately 9,000 jobs for New Yorkers.

“The governor’s policies make this great state a more affordable and attractive location, opening the door for even greater economic investment and job creation for New Yorkers,” Iger said.

Netflix has committed to four serialized programs, and a miniseries event where the Marvel characters from the first four series will team up as “The Defenders,” much like “The Avengers.”

“Setting our production in New York City truly underscores the authenticity and excitement we plan to bring to ‘The Defenders’ and their ‘flawed heroes of Hell’s Kitchen’ stories,” said Alan Fine, president of Marvel Entertainment.