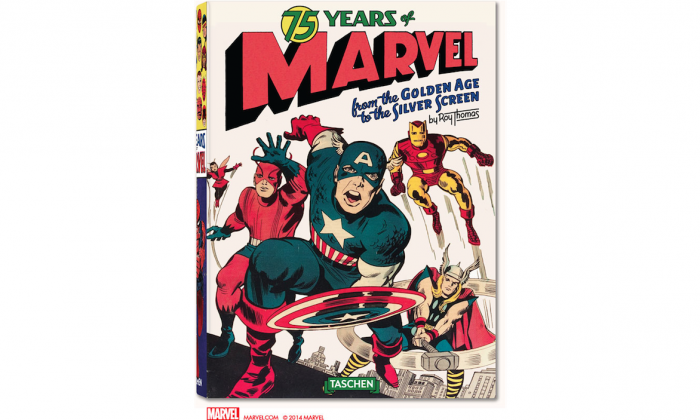 Marvel will release a 720-page magnum opus for its 75th anniversary in the fall of 2014 named "75 YEARS OF MARVEL: FROM THE GOLDEN AGE TO THE SILVER SCREEN." (Marvel Entertainment)
Entertainment

Marvel Celebrates 75 Years With 700 Pages of Captain America, Spider-Man, Thor and Others

To celebrate 75 years since its inception, comic book giant Marvel is releasing a 720-page magnum opus, “75 Years of Marvel: From The Golden Age to The Silver Screen.”

The book details the history of Marvel which has been creating the world’s best known superheroes since the 1960s.

The book’s 720 pages will be filled with more than 2,000 images of vintage comic books, one-of-a-kind original art, behind-the-scenes photographs and film stills, as well as rare toys and collectibles. The book also comes with a four-foot long accordion-fold timeline poster.

Marvel will provide an inside look at all the favorite characters like Captain America, Spider-Man, Thor, Iron Man, but also Human Torch, Sub-Mariner and others. Written by comic book historian and former Marvel editor-in-chief Roy Thomas, the book also features essays and stories from creators Stan Lee and Jack Kirby.

“75 Years of Marvel: From The Golden Age to The Silver Screen” by Thomas and editor Josh Baker will go on sale in the fall and will cost $200 per copy.

Thomas also previously worked on “Avengers,” “Uncanny X-Men,” “Conan the Barbarian,” “The Incredible Hulk,” and “Star Wars.” The book will be published by Taschen.