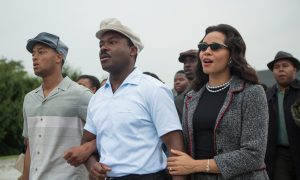 Martin Luther King Was Nothing Without My Father

“Selma,” which began showing in theaters on Jan. 9, depicts the civil rights march from its namesake town in Alabama, to Montgomery, Ala. The storyline paints Ralph Abernathy Sr. as a subordinate to King.

During a celebration of Martin Luther King Day at Convent Avenue Baptist Church, Abernathy III took to the podium to set the record straight: “They separated them in death but they were inseparable in life … Abernathy was King’s mentor in Montgomery. King wouldn’t make a move without Abernathy’s advice.”

“There will never be another Martin Luther King Jr., until there’s another Ralph David Abernathy,” said his son, to a crowd of elected officials, clergy, and locals.

In fact, Abernathy and King were “civil rights twins,” said the former’s son. In an extensive speech, Abernathy III revealed details about the partnership and denounced Selma’s producer Oprah Winfrey for failing to accurately depict the relationship.

There will never be another Martin Luther King Jr., until there’s another Ralph David Abernathy.
— Rev. Ralph Abernathy III

Whenever King went to jail, Abernathy went with him. They also went together to give speeches, said the younger Abernathy. And on April 6, 1968, when King was fatally shot at the Lorraine Motel in Memphis, Tenn., Abernathy was only steps away, holding a cologne the two shared.

“My father cradled him in his arms as he took his last breath,” said Abernathy III. Abernathy Sr. then succeeded King in leading the civil rights movement, becoming the South Christian Leadership Conference’s head in the Poor People’s Campaign where protesters sat out in Washington mall for six weeks, demanding economic justice.

Abernathy III accused the film’s producers, of valuing profit over historical accuracy, stating: “It’s obvious that Oprah Winfrey’s intention was not to make a good movie as much as it was to make good money.”

“Selma” has also come under controversy by some for portraying then United States President Lyndon B. Johnson as a reluctant participant in the fight for African-American voting rights.

Abernathy and King had met Johnson in the White House and worked together as an example of partnership between whites and African-Americans, said Abernathy III.

Another complaint Abernathy had with the film: James Bevel, another civil rights leader, did not lead King and Abernathy, as shown in the movie, but rather vice versa.

To right the wrongs, the younger reverend called for U.S. Rep. Charles Rangel, who sat on stage during the church celebration, to work with the mayor and City Council to name a street in New York City after his father.