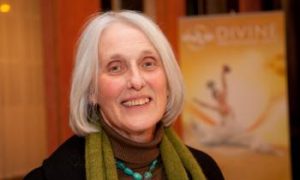 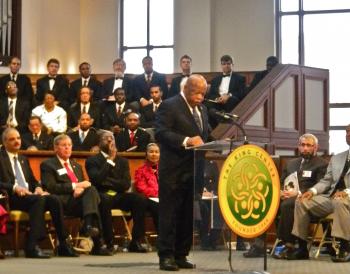 By Mary Silver
Print
ATLANTA—When Attorney General Eric Holder told the assembled multitudes at Ebenezer Baptist Church, “I am honored to bring you greetings from President Barack Obama,” waves of cheers, applause, and shouts began. The standing ovation lasted so long he shrugged his shoulders, hands out. When he could be heard, he laughed and said, “Guess I could sit down now.”

“I’m so proud of Eric Holder,” said Trumpet Awards founder Xernona Clayton. More than that, she said she was proud to see the first African-American attorney general.

The mood was jubilant at the church on Martin Luther King Jr. Day, yet shadowed by thoughts of violence and loss. Many spoke of the shootings in Tucson, Ariz., a little more than a week before. More than one blamed recent angry rhetoric for creating the right climate for the killing spree.

Holder quoted Martin Luther King Jr. saying, “Only when it is dark enough can you see the stars.” He said King’s values of tolerance, nonviolence, compassion, love “and above all, justice, prove that despite all opposition–let’s be honest–inside and outside of government, here in America large-scale sweeping change is not impossible.”

Georgia U.S. Sen. Johnny Isakson said each year he reads Dr. King’s writings to prepare for the holiday. In King’s “Letter From a Birmingham Jail,” he told other church leaders who thought as an Atlantan he should ignore the troubles of Birmingham that he was a citizen of Birmingham. “Today, we are all citizens of Tucson,” said Isakson.

Dr. King's wife, Coretta Scott King, founded the King Center for Nonviolent Social Change, host of the celebration, to carry on the work of building what she and others called, “the beloved community,” one that welcomes and respects everyone.

Children presented flags of many nations. “We Shall Overcome,” anthem of the civil rights movement, was sung in Hebrew, English, Spanish, and Italian. Students representing Falun Gong, Judaism, Christianity, and other faiths read a litany of commemoration statements, evoking Exodus, calling for freedom and human rights for everyone. After each verse, the audience responded, “Let my people go.”

“My beloved brothers and sisters,” said Georgia Congressman John Lewis, “this man of peace, love, and nonviolence taught us to build and not to tear down. He taught us to reconcile, not divide, to love, not to hate. … If Dr. King were here he would tell us to be kind. … What is running rampant among us? What does it take for us to admit that something is wrong?

Newly elected Georgia Gov. Nathan Deal had the misfortune to follow the thrilling orations of Lewis, who moved the crowd with his rich voice, his passion, and his stellar civil rights biography. Deal made the best of it, smiling and saying he found it proper that as the 82nd governor of Georgia, he could celebrate the 82nd birthday of “one of our greatest native sons.” He too, inspired a standing ovation.

Martin Luther King III gave the keynote speech in which he urged people not to worship his father as an idol, but to embrace his ideals. “I feel there is a trend to put him on a pedestal, as if no one can be like him.” But he was just a man of integrity, said King.