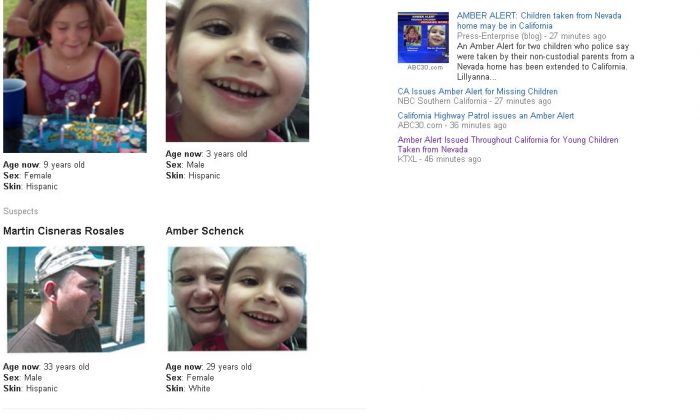 Martin Cisneras Rosales, also known as Martin Cisneros, and Amber Schenck might be trying to go to Mexico after abducting their children Lillianna Ramirez, 9, and 3-year-old Martin Angel Rosales II, triggering an Amber Alert across California. The children were taken from Elko, Nevada.

Martin Cisneras Rosales is a 33-year-old Hispanic who has the alias Martin Cisneros and is from Elko, Nev. He was last spotted with Amber Schenck, 29, who is white and is the mother of both children.

Rosales is the father of Martin Angel, while Schenck is the mother of both kids.

They were possibly driving a blue Ford Mustang from the 1980s or 1990s model year. It might have Nebraska license plates or paper plates.

The Amber Alert was activated because authorities believe the kids are in “imminent danger of serious bodily injury or death.”

KOLO reported that the kids were taken from Department of Child & Family Services (DCSF) custody, taking place on Wednesday.

KTNV reported that Rosales has violent tendencies. A restraining order was issued in July to keep him away from his son.

A Nevada court order that was issued in the case said the children are in serious danger from their parents.