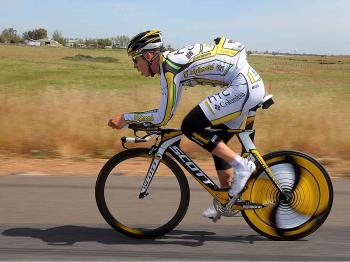 By James Fish
Print
Tony Martin, who did an enormous amount of work for his HTC-Columbia team in Stage Six, somehow found the legs to turn in the best time in Stage Seven, the individual time trial, winning the stage with a time of 41:41.

Behind him were the race favorites, Michael Rodgers, David Zabriskie, and Levi Leipheimer, 23, 27, and 33 seconds behind.

Jens Voight, not normally considered a time trial specialist, finished fifth with his enormous power, moving himself into fifth overall.

Michael Rodgers kept the yellow jersey, but only by nine seconds. Levi Leipheimer is now second in the General Classification, with David Zabriskie in third, 24 seconds back. This sets up a terrific battle for the overall win in the final stage on Sunday.

Each lap included a couple short, steep climbs, just enough to slow the pure time trailers and favor the power riders. The whole route slops; it is not a traditional flat time trial course.

The first three miles were gently downhill, followed by four miles sloping uphill, culminating in the first climb at the seven-mile mark, actually a double-peaked hill. The course then sloped downhill back to the start line.

This put the second climb at 3.5 miles from the finish, with an almost flat run of about a mile to the finish.

The final stage is an 84-mile loop through Los Angeles and Ventura counties, mostly flat with a climb up to Mulholland Highway, a Cat ¾ climb that drops the riders back onto the flat for the final dozen miles.

The race could end up a game of strategy

The climb shouldn’t be enough to crack any of the leaders, but it could be a place to launch an attack. Almost certainly some of the riders right behind the three leaders will launch early attacks, and some of the young riders with nothing to gain or lose will attack early, hoping for a successful breakaway and a stage win.

The three American powerhouse teams: HTC-Columbia, Garmin-Transitions, and Radio Shack—will have to decide which attacks to cover, and which to ignore. They will be calculating gaps and leads and trying to decide when to make their moves; they will gladly surrender the stage win for the overall win, but don’t want to get caught out should one of the top ten riders get into a break.

At the same time, the leaders won[t want to waste their strength—and their teammates—chasing breaks that the whole peloton might ride down before the finish.

But do the three leaders want the Tour of California to come down to a sprint finish?

Sunday’s stage promises to be tense and exciting end-to-end.