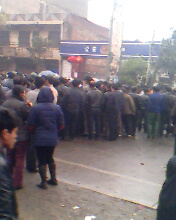 The standoff between police and protesters in front of the new Zhushan Government Building during the recent protests in Hunan province, China. (Pan-Blue Coalition)
China

CHINA—The riot in Zhushan, Yongzhou has been quelled by the police, but the whole city remains under martial law. Since the afternoon of March 13, road traffic has partially resumed for restricted time periods, but public transport service has not been permitted yet.

According to a local resident, authorities have stationed over 2,000 armed police in the town.

On March 13, police vehicles patrolled the city and broadcast messages requesting the residents to keep calm and not to listen to “rumors.” They claimed that the police had been restrained and would not harm civilians.

Responding to the messages broadcast from the police vehicle, a local resident said, “It's a lie! I saw the police beating civilians. Some even targeted pedestrians; passengers on motorcycles were beaten as well. At least 50 people were injured from the beatings.”

Over the last two days, many international media have arrived at the scene. Major television stations including several from Hong Kong, Japan, England, etc. have been reporting on the event as their top story.

After the incident, Pan-Blue Coalition member Zhang Zilin—who had been monitoring the development of the protests—left Yongzhou in the afternoon of March 13. He said that the Security Department had summoned him because he reported this incident to the international media and the authorities had issued strict orders prohibiting media reports.

Local residents believe that corruption in the government has directly caused the increase in bus fares. Because the National People's Congress is currently being held in Beijing, people are angered by the arrogance of the local authorities who dared to create trouble during this “sensitive period.”

According to local residents, the public transport service between Zhushan, Daqingping, etc. to Yongzhou were taken over and brought under the control of Anda Bus Company, the only allowed bus operator in the region. Passengers were dissatisfied with the company's service. After the New Year, students returning to school were charged extra for their luggage and medium-sized buses were not permitted to take students. This increase in bus fares finally triggered long accumulated public resentment and the demonstration turned into a riot. The actual numbers participating in the riot could possibly exceed 20,000.

Human Rights in China spokesman Feng Congde commented that the Yongzhou incident and the recent large scale conflicts between the police and the public reflects the huge gap between the true situation and the image of a harmonious society that the Chinese regime has endeavored to build.