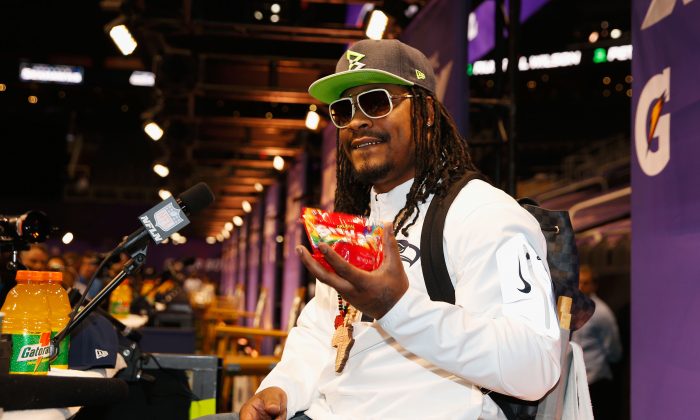 Seattle Seahawks running back Marshawn Lynch has become notorious for his non-answers to reporters, but took it to a new level at Super Bowl media day.

While most players looked happy and relaxed as they prepare for the big game, Lynch decided to repeat the same phrase to all questions, no matter what.

The NFL requires players and coaches to answer questions for about five minutes each, although that time limit isn’t strictly held to.

Lynch repeated “I’m just here so I won’t get fined” to all questions, according to multiple reporters.

Dozens surrounded the Seahawks back to try to get something out of him.

After 4 minutes and 51 seconds, Lynch said “Time” and then left.

Lynch’s attitude toward reporters has divided both the media and the public, with some saying he doesn’t have to give legitimate answers to reporters while others argue that it’s part of his job and he should at least make an effort.

Per NFL PR, players don’t need to be there the whole time. Marshawn Lynch may be OK on this one. League was monitoring.

I’d like to thank my bosses for assigning me a Marshawn Lynch story today. I’m going to have to put in for overtime for the transcribing.

They should fine him anyway. On the grounds of stupidity. An embarrassment to his organization. #Marshawn

#Seahawks Marshawn Lynch with the single most absurd media day podium crowd I have ever seen. pic.twitter.com/adJRHii9tF

Crowd at media day cheering Marshawn Lynch every time he answers, “Hey, I’m just here so I won’t get fined.

The elusive Marshawn: “I’m just here so I don’t get fined.” pic.twitter.com/vABImMYhaw

ESPN notes that Lynch gave some insight into his mindset in an interview in 2013.

“Being from Oakland, you see a lot of things,” Lynch said. “You see friends turn on friends all the time. You see family turn on family. So I feel like if I’m going to rock with you, then I’m [in] 100 percent, and you’re going to know that. … I’ve been pretty good at reading people. If you rockin’ with me cause you’re just a solid individual, then we’re rockin’. But if you got a motive or something, I am going to probably see right through that.”

Lynch has been fined for not talking to reporters, but hasn’t been fined as of yet for his non-answers in any of the cases.