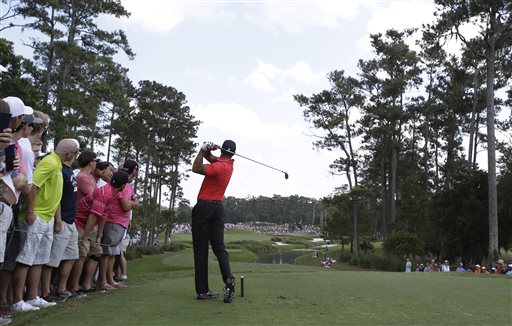 Tiger Woods hits from the fifth tee during the final round of The Players championship golf tournament at TPC Sawgrass, Sunday, May 12, 2013, in Ponte Vedra Beach, Fla. (AP Photo/John Raoux)
Golf

Two course marshals said that Tiger Woods lied after he told them his side of a spat between him and golfer Sergio Garcia.

Garcia claimed Woods pulled a club from his bag on Saturday during The Players Championship, which distracted him.

But Woods said that he did not see Garcia when he pulled the club and also said the course marshals told him he could pull the club.

However, ESPN is reporting that the course marshals did not say anything to Woods.

“He didn’t ask us nothing,” marshal Gary Anderson said, according to the network. “We didn’t say nothing. We’re told not to talk to the players.”

Chief marshal John North, who was there when Woods made the moved, also told the media nothing was said to Woods.

“Nothing was said to us and we certainly said nothing to him,” North said, according to the network. “I was disappointed to hear him make those remarks. We’re there to help the players and enhance the experience of the fans. He was saying what was good for him. It lacked character.”

When woods pulled out the club and looked at his next shot, the crowd cheered. “You have to pay attention to what’s going on because the other guy is hitting. You do something when you’re in the crowd and the crowd is going to respond,” Garcia said, according to the New York Post.

Woods originally said “the marshals, they told me he already hit, so I pulled a club and was getting ready to play my shot, and then I hear his comments afterward and it’s not real surprising that he’s complaining about something,” the Post reported.

And after Garcia made his comments, Woods said, “It’s not real surprising that he’s complaining about something,” reported the New York Daily News.