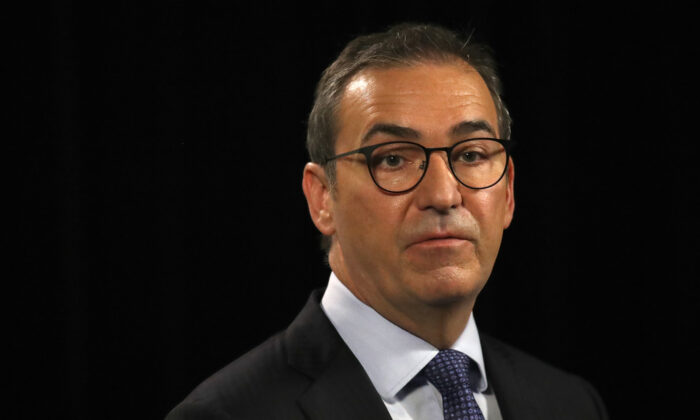 South Australian (SA) Premier Steven Marshall will step down as Leader of the Liberal Party in the wake of Labor’s election win on Saturday.

In a social media post on Sunday, Marshall said it is time for someone else to take the reins and lead the team into the future.

“I will step down as Leader as soon as the Party Room is able to meet to elect my successor,” he said.

“I thank all my past and current colleagues for their support over the past nine years and will do all that I can to assist the new Liberal leader to succeed.”

This comes after Premier-designate Peter Malinauskas and his Labor team took Saturday’s election with 40.4 percent of primary votes compared to Liberal’s 34.6 percent, as well as winning 28 seats in the 47-seat House of Assembly as opposed to Liberal’s 13.

In his victory speech on Saturday evening, Malinauskas referred to a phone call he had just received from Marshall and called the outgoing Premier a class act.

“Steven Marshall’s call was utterly generous, it was gracious, and it was done with the class that we have become incredibly familiar with,” he said.

“Steven Marshall has been the Leader of the Liberal Party in South Australia for nine years, including four years as Premier, and that is a very significant contribution to his party and to our state, and we very much thank him for it.”

Marshall said in his post that it had been a great privilege to serve as the state’s 46th Premier and thanked the people of South Australia and his party for the opportunity.

He also said that he was proud of his government’s achievements.

“We abolished payroll tax for small businesses and lowered household costs such as electricity and water bills,” Marshall said.

“We re-opened the Repat as a health precinct and moved year seven into high school,” he added, going on to say that his government opened up new opportunities in exciting industries so that young South Australians won’t need to go elsewhere for an exciting career.

Marshall also mentioned the establishment of the Australian Space Agency headquarters in Adelaide, as well as the unlocking of the state’s reservoirs and national parks to make the state more appealing to both residents and tourists.

“We faced the most extraordinary of times, through natural disasters and a global pandemic, managing to keep South Australians safe and did so with fewer restrictions than almost anywhere else in the world,” he said.

“Whilst I am disappointed by the election outcome, I take full responsibility for the result and accept the will of the people.”

Victorian Liberal MP Michael O’Brien congratulated Marshall on his service to SA and the legacy he and his team have left.

“Enjoy a rest knowing that you served with honour, energy and courage in the most trying of times,” he said.

Marshall said he looks forward to continuing to serve the people of the Dunstan electorate, for which he has been a state member for eight years.