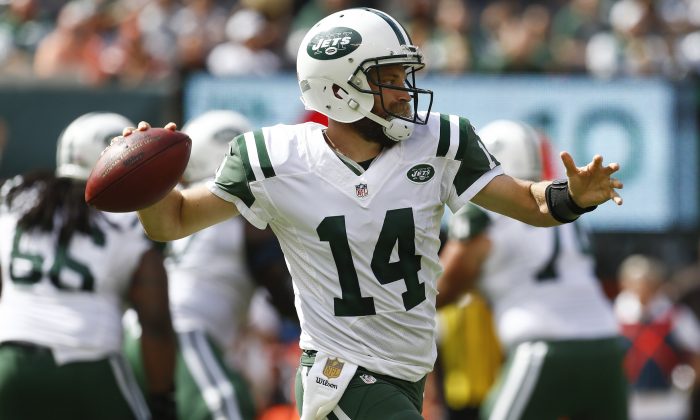 Let’s face it, the Jets haven’t had a good passing game for a while—a long while. When the team brought in Eric Decker—who most pundits viewed as more of a number-two receiver—a year ago, he instantly became the best receiver on a team that lacked any playmakers.

Just a couple of days later, Maccagnan then traded a conditional sixth-round pick to Houston for journeyman quarterback Ryan Fitzpatrick, who could legitimately challenge the talented, but inconsistent, Geno Smith for the starting position.

Just like that, the Jets had upgraded their weak passing game—easily the team’s Achilles heel.

Sunday, with Fitzpatrick—now with his sixth NFL team—starting for the injured Smith, the Jets passing game actually looked NFL-ready.

After a slow start it was Marshall’s forced fumble and subsequent fumble recovery of safety Tashaun Gipson, who had intercepted Fitzpatrick’s pass, that turned the game around for Gang Green.

Two plays later the Jets scored to tie the game at seven points. Then just before halftime, Fitzpatrick found Decker for a 15-yard score.

The very next offensive possession—their first of the second half—Fitzpatrick found Marshall in the end zone for a one-yard TD pass, despite Marshall having two-time Pro Bowl cornerback Joe Haden all over him.

Fitzpatrick threw for 179 yards and two scores on the day, generating a 95.7 quarterback rating—a far cry from Geno Smith’s 77.5. Meanwhile, Marshall, who lost weight in the offseason and looks great so far, won his individual battle with Haden, with six receptions for 62 yards and a score.

Ultimately, the Jets would still rather run the ball with running backs Chris Ivory and Bilal Powell behind a rugged offensive line. The duo carried the ball 32 times against Cleveland, while Fitzpatrick attempted 24 passes. Although it’s just one game, it’s a good start toward a balanced offense.