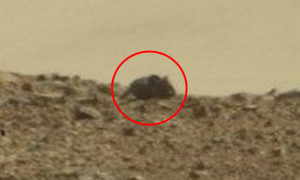 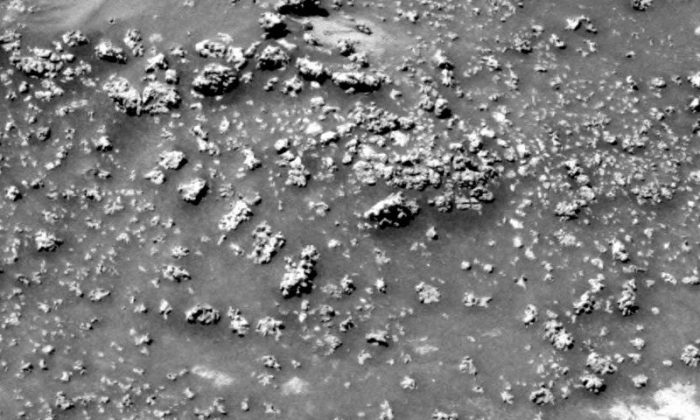 Silica formations possibly formed by microbial life on the surface of soil near Home Plate, in a photo taken by the Mars rover Spirit in 2008. (NASA/JPL-Caltech)
Science

Two American astronomers believe that they have found the key to unlocking evidence that there was once life on Mars.

In 2008, the Spirit rover discovered deposits of opaline silica in the Gusev crater, the product of a former volcanic system.

The astronomers noticed that the silica photographed by Spirit looked remarkably similar to the silica formed by microbes found on geysers in northern Chile, where the extremely dry climate makes it similar to the Martian landscape.

In the El Tatio region in the Atacama Desert, rainfall is almost nonexistent, ultraviolent radiation is high, and the temperature fluctuates between sub-zero and 100 degrees throughout the year. Steven Ruff and Jack Farmer, astrobiologists at Arizona State University, have trekked twice to El Tatio to further study formations of silica, which feature surface nodules resembling heads of cauliflower, Smithsonian magazine reports. They believe the silica found on Mars may have been similarly sculpted by microbes.

But other experts in the field caution against becoming too excited about the findings.

“Having worked on modern hot springs, I have seen all forms of structures that look biological but are not,” Kurt Konhauser of the University of Alberta, who is the editor-in-chief of the journal Geobiology, told Smithsonian.

In late 2015, NASA found evidence of water on modern Mars, when spectro-analysis of images taken of the planet’s surface showed darkened streaks that appeared to have been created by flowing water.