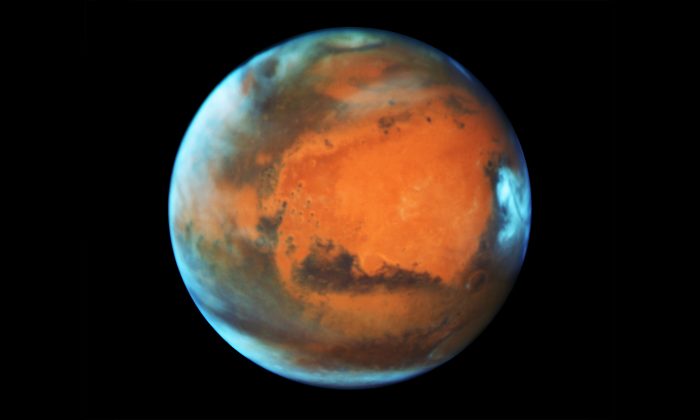 Mars will be closer to Earth than it has in 18 years—and closer than it will be again until 2287. (NASA, ESA, the Hubble Heritage Team (STScI/AURA), J. Bell (ASU), and M. Wolff [Space Science Institute])
Space

If you see a blazing red light in the sky tonight (July 31) don’t panic.

Not that there is any danger of collision—the two planets will be 35.8 million miles apart, give or take a few miles. But Mars will be closer to the Earth than it has been since 2003—its second-closest approach in the past 60,000 years.

According to EarthSky, since July7, Mars has been the brightest object in the night sky, after the moon and Venus, and will be, through Sept. 7.

Tonight the red planet will be at its brightest.

Every 26 months or so, NASA reports, the orbits of Earth and Mars deposit the two planets on the same side of the sun, in approximately the same section of space. This is called “opposition”—the sun and Mars are on opposite sides of the Earth.

Every 15 to 17 years, Mars and Earth pass each other in opposition while Mars is at perihelion—the point in its orbit where the planet is closest to the sun. When these two conditions coincide, the two planets are as close together as they can get.

The distance between the two is not constant. Planets’ orbits are constantly, minutely changing, as they tug on each other with gravitational force. If one of the gas giants like Jupiter or Saturn is in the neighborhood, it will pull all the inner planets toward it a little.

“Right now, we’re approaching Mars when Mars is near the closest point to the sun on its orbit,” Betts said. “But next time we come close to Mars, it will be further from the sun, and further from us.”

The perihelion opposition of 2003 was unusually close—NASA said the two planets won’t get that close together again until Aug. 28, 2287.

No need to despair—Mars will be a little closer than it is tonight on Sept. 15, 2035—not as close as in 2003, but plenty close, according to Universe Today.

If you don’t want to wait that long, take a few minutes this evening to step outside and glance skyward. If you have binoculars, or better still, know someone with a telescope, take advantage of the opportunity.

Not weather on Earth—weather on Mars. Planetwide dust storms might obscure features, which even a small telescope would usually be able to pick out, with Mars being so close.

“It happens every couple of years, but this is the worst we’ve seen in a long time,” Betts said.

The weather on Earth might not be suitable for stargazing tonight, either—but Mars will be exceptionally bright through the first week of September.