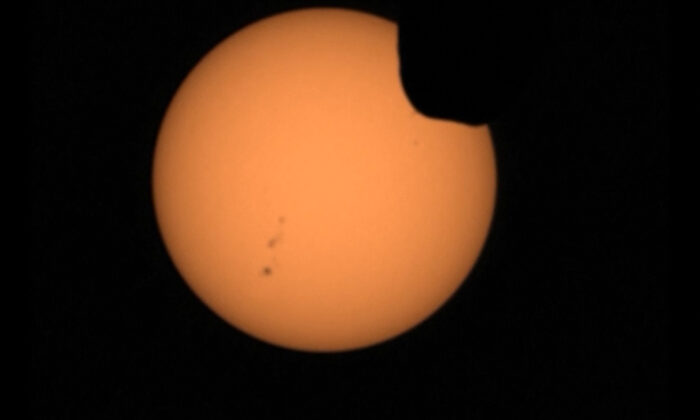 One of Mars' two moons eclipsing the sun, in a still from a video, on April 20, 2022. (NASA via AP/Screenshot via The Epoch Times)
Space

NASA has recorded video of a Mars moon eclipsing the sun, an effort that helps them determine when the moon might crash into the planet.

Perseverance Mars rover used its Mastcam-Z camera system to shoot video of one of Mars’ two moons, Phobos, Wednesday. NASA says it’s the most zoomed-in, highest-frame-rate observation of a Phobos solar eclipse ever taken from the Martian surface.

Each time the eclipses are observed, they allow scientists to measure subtle shifts in the moons’ orbit over time, according to NASA.

Several Mars rovers have observed Phobos crossing in front of the Sun over the past 18 years but Curiosity was the first to record video in 2019.

The moon is drifting toward the surface and it’s expected to crash or fragment into chunks that will impact the planet, but not for tens of millions of years from now.