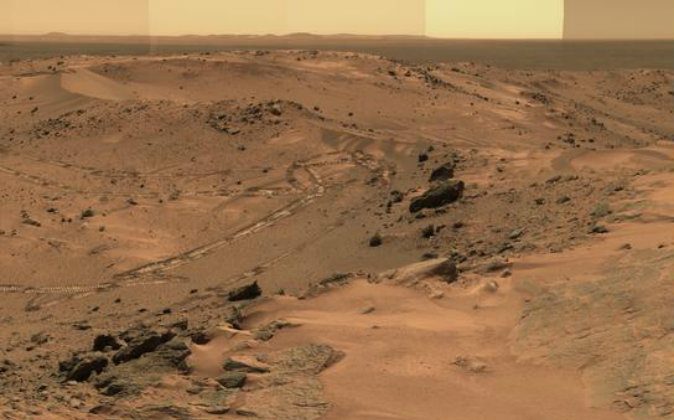 A woman who is claiming to be a former NASA employee said that she saw “men walking on Mars” in 1979.

Identifying herself only as “Jackie,” she said she saw men in suits running on the surface of Mars as she was working as part of a team downloading data from the the Viking Lander.

She spoke about what she saw on Coast of Coast AM, saying: “I wonder if you could solve a 27-year-old mystery for me. That old Viking rover was running around.”

“Then I saw two men in space suits – not the bulky suits we normally used, but they looked protective,” she added. “They came over the horizon walking to the Viking Explorer.”

She noted: “We ran upstairs – but they locked the door, and taped paper over the door so we couldn’t see. My question is – were they our guys?” according to the Mirror.

The Viking 1 and Viking 2 spacecraft were deployed in the 1970s and imaged the Red Planet in high-resolution. “Although no traces of life were found, Viking found all elements essential to life on Earth – carbon, nitrogen, hydrogen, oxygen and phosphorus – were present on Mars,” NASA said at the time.

“There are a few problems with Jackie’s testimony,” said Nigel Watson, a UFO expert and an author of the book Haynes, UFO Investigations Manual, according to MailOnline.

“Firstly, the Viking landing craft did not send a live TV feed back to Earth, and as its name suggests it simply landed on the Martian surface, it did not have wheels like the latest Curiosity craft,” he said, adding that her grasp of the technological terms don’t appear legitimate and added it’s “impossible to know if she really worked for NASA.”