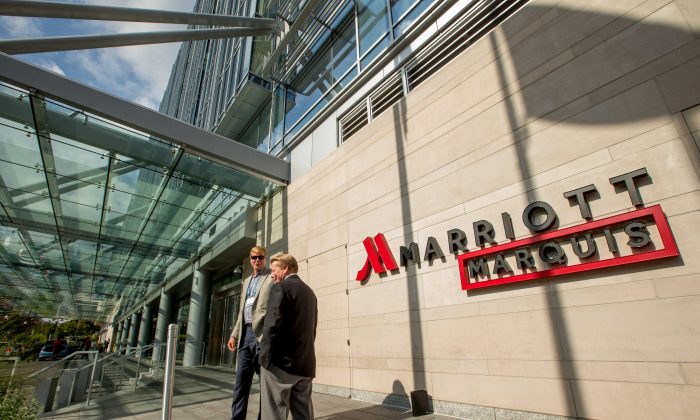 NEW YORK—Several of the best-known names in travel are now united in one hotel company.

In total, 30 hotel brands now fall under the Marriott umbrella to create the largest hotel chain in the world with more than 5,700 properties and 1.1 million rooms in more than 110 countries. That’s more than 1 out of every 15 hotel rooms around the globe.

Marriott now eclipses Hilton Worldwide’s 773,000 rooms and the 766,000 that are part of the Intercontinental Hotels Group family, according to STR, a firm that tracks hotel data.

“We’ve got an ability to offer just that much more choice. A choice in locations, a choice in the kind of hotel, a choice in the amount a customer needs to spend,” Marriott CEO Arne Sorenson told The Associated Press in an interview Thursday.

Starwood’s guest loyalty program—Starwood Preferred Guest—was also a “central, strategic rationale for the transaction,” Sorenson said. The program’s members are deeply loyal to it, have generally higher incomes and tend to spend many nights on the road.

Each Starwood point will be worth three Marriott Rewards points.

Starwood put itself up for sale in April 2015. The Stamford, Connecticut, company had struggled to grow as fast as its rivals, particularly in “limited service hotels,” which are smaller properties which don’t have restaurants or banquet halls. They are often located on the side of the highway, near airports or in suburban office parks.

To get Starwood, Marriott had to outbid China’s Anbang Insurance Group. U.S. and European anti-trust regulators were quick to approve the sale but the Chinese government hesitated, delaying the sale by months.

“We may have been a little too optimistic about how fast we could get this thing closed,” Sorenson said Thursday.

Marriott and Starwood—like other hotel chains—own very few individual hotels. Instead they manage or franchise their brands to hundreds of individual owners, often real estate development companies. Those individual hotel owners are responsible for setting nightly room rates. It isn’t uncommon for a developer to own a Marriott, Hilton, Hyatt and Sheraton in the same city.

The purchase gives Marriott more leverage with corporate travel departments who often look for one giant chain to house all of their employees. It also gives Marriott more power over Expedia and Priceline, the two giant online travel agencies that sell rooms on behalf of hotel companies in exchange for a commission. The hotel industry has spent the last year trying to get travelers to book directly with them instead of the travel agencies to avoid paying those fees.

There are still many details to work out.

Marriott has thrived as an “asset light” company, owning a handful of hotels. Starwood has been selling off properties, while singing long-term management agreements for those same hotels. As of June 30, it still owned 23 properties. Sorenson said he believes there is a strong market to continue selling off many of those iconic hotels.

“There is always a market for the St. Regis in New York,” he said, adding that other assets in the portfolio have comparable stature. “In great global cities, real estate like that always has a value.”

The new company will keep Marriott’s Bethesda, Maryland headquarters but hasn’t announced if it will keep any presence at Starwood’s Connecticut or New York offices.

Then there are the 30 brands. Some have performed better than others but Sorenson said all of them will probably survive the merger.

“I think so. Every one of them has hotels in them,” he noted.

For now, Starwood and Marriott will keep separate loyalty programs. Starwood has a credit card deal with American Express as well as close partnerships with Delta Air Lines and Uber. Marriott has a much larger program with partnerships with Chase and United Airlines.

“Nothing changes immediately. We have to see how those partnerships evolve,” Sorenson said.

Gary Leff, who writes about points and miles at ViewFromTheWing.com, called the three-to-one exchange rate of Starwood points to Marriott points “just right.”

“It’s one of the many reasonable and positive steps that Marriott has taken along the way as it acquires Starwood,” Leff said. “But there’s a whole lot still to happen between now and the programs actually being combined.”