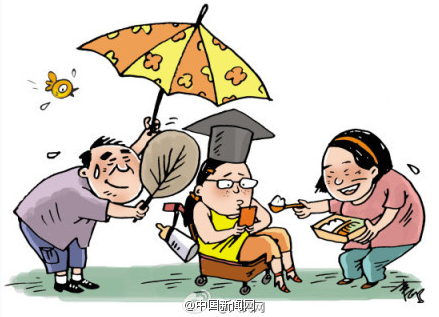 Screenshot of a cartoon showing a spoiled child in China. (Screenshot/weibo)
China

Married Chinese Woman’s Mother Puts Socks On for Her

A young woman in eastern China still lives with her parents, even though she is married, and is so spoiled that her mother puts her socks on for her.

Ms. Zhu, 26, got married last August, and her husband, Mr. Jiang, reluctantly agreed to live with his parents-in-law, according to Nanjing News.

Zhu’s parents were well into middle age when she was born. Although she is now 26, her mother puts her socks on for her every morning, makes her breakfast, and then walks with her to the bus station. She will not leave until Zhu has got on the bus to go to work.

Jiang told Nanjing News he did not realize how much his wife relies on her parents, and thinks it is unacceptable. “What if we have kids in future?” he said, adding that he feels concerned whenever he thinks about this.

The article also mentioned Chingmy Yau, a famous actress in Hong Kong, whose daughter is 14. To get closer to her, Yau goes shopping with her daughter, and they race around together in her Ferrari.

According to a friend, Yau is worried her daughter will get a boyfriend without consulting her, and so she takes her to and collects her from school, and also drives her around during the holidays.

Cao Qiuyan, a Nanjing psychologist, told the newspaper that Chinese parents often spoil their children like this. He gave several examples, such as college students who send dirty laundry back home to be washed, and parents who clean their children’s places while they are at work.

A Guangdong netizen commented: “Single children born in the earlier or new younger generations always expect their meals and clothes to arrive automatically, because they come from quite rich families.”