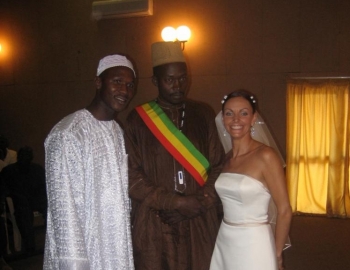 The “wolf in groom’s clothing” gets a free ride in a limo after dumping his bride. (Lorne Finley)
US

Determined to call attention to her plight as a victim of marriage fraud, Lainie Towell donned her wedding dress and staged an elaborate protest in Ottawa last Thursday.

Braving cool temperatures in her strapless gown, Towell walked and cycled the 15 kilometres between Ottawa’s airport parkway and Parliament Hill while her so called groom, wearing a wolf’s mask, enjoyed a free ride in a decorated wedding limousine.

Instead of “Just Married” the limo sported a “Just Landed” sign, while the “wolf in groom’s clothing” leaned out the limo window waving a Canadian flag.

“I’m using art as a vehicle for communication and I believe it’s extremely effective,” says Towell, a professional dance artist.

Towell married Fodé Mohamed Soumah in April 2007 in Conakry, Guinea. They began a relationship in 2004 when she travelled to West Africa to research dance. She traveled between Canada and Guinea regularly, and Soumah, a musician, finally moved to Ottawa on New Year’s Eve 2007.

But four weeks later Soumah was gone, his closet empty, his wedding ring on the counter.

“My life was just destroyed. The ground was pulled out from under my feet,” Towell says.

Soumah later told Towell that he wanted a divorce and reminded her that as his sponsor she would have to provide for him. Under Canada’s immigration laws, sponsors are financially responsible for their spouse for three years even if the marriage fails.

Another shock came for Towell when she discovered that after they were married and before he moved to Canada, Soumah fathered a child by a 15-year-old ballet dancer in Guinea.

Subsequently, seven months after his arrival in Canada Soumah was issued a removal order for failing to disclose that he had a child in Guinea. Soumah, however, has appealed the order, which is his right as a permanent resident. The removal order is unrelated to Towell’s allegation of marriage fraud.

‘Use some common sense’

Towell is one of a growing number of Canadians, both male and female, who are finding themselves victims of marriage fraud—one of the most frequent forms of immigration fraud.

According to Citizenship and Immigration Canada (CIC), Canadian officials at missions around the world constantly monitor for fraudulent activity and fake marriages.

In an interview with CTV’s Canada AM, Immigration Minister Jason Kenney said migration integrity officers conduct in-depth interviews with would-be spouses in an effort to discover whether their intentions are legitimate.

He added, however, that fake marriages can be difficult to detect and Canadians need to “use their own vigilance, use some common sense.”

“I want to crack down on this kind of practice that leaves so many Canadians stranded here in Canada, but people have to take responsibility as well and make sure they’re getting into relationships that they can really trust,” Kenney said.

CIC says sponsorship should not be taken lightly, and those involved are responsible for ensuring that their marriage is genuine.

But advocates for marriage fraud victims say Canada’s laws are unfair because the victim usually has no control over the situation. In addition, there is no binding responsibility on sponsored spouses, who are granted permanent resident status as soon as they enter the country.

Organizations such as Stop Marriage Fraud and Canadians Against Immigration Fraud (CAIF) want Canada to adopt an approach similar to that used countries such as the United States and Australia, where foreign spouses must wait three years before they can become permanent residents.

They also want legislation in place that would protect Canadian sponsors, and complain that CIC is slow to act in deporting or penalizing those guilty of marriage fraud.

But Kenney told Canada AM that once a sponsored spouse arrives in the country, removing him or her on allegations of marriage fraud in a timely manner becomes difficult.

“As soon as someone has abandoned their spouse, if they’ve left, an investigation can start. But frankly, the sponsored spouse has all sorts of legal rights once they hit Canadian soil and it’s impossible to remove someone like that quickly.”

In February, Toronto-based CAIF launched a class action lawsuit against CIC and Canada Border Services Agency (CBSA) over their alleged failure to go after sponsored spouses guilty of marriage fraud and for “denying the rights of victims.”

The public performance Towell staged last Thursday, which was filmed by W5 for use in an episode about marriage fraud, wasn’t her first. In April she walked through parts of Ottawa—including past the CIC and CBSA offices—in her wedding dress with a door strapped to her back.

The door symbolized the burden she will have to carry should her ex-husband be able to collect welfare while he appeals his removal order, which could take up to two years.

The stunt captured national and international media attention, she says, with the result that she has been invited to participate in a panel discussion in Seattle with Canadian and American immigrant experts. She will also speak at the premiere screening of The Promise of Plenty, a documentary about immigration policies in both countries which features her case.

“I’ve been extremely vocal about my case,” she says. “After immigration told me that I had no case, and Canadian Border Services said the same thing and ditto for the RCMP and my MP, I basically called the media up and told them what had happened.”

Since going public, Towell says “people from across Canada” who were also duped by their spouses have been contacting her. She has written a book on the subject, and says she hopes the publicity she has generated—which has helped her case “move at the speed of light”—will in some way help other marriage fraud victims.

“I came to realize that it’s not just about me. I realized this is a huge issue, but it’s a silent issue because people don’t want to speak about it—they’re embarrassed, they’re destroyed, they’re crushed.”