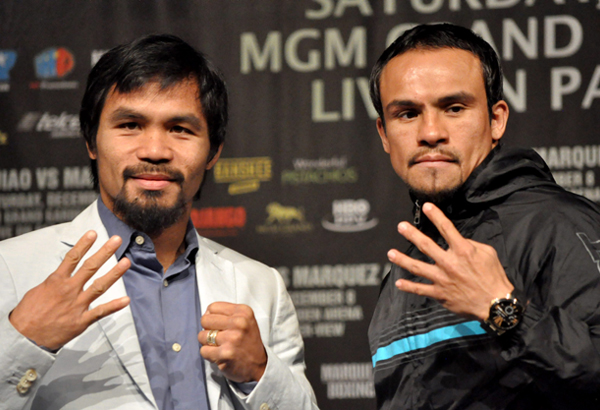 After Juan Manuel Marquez defeated Mike Alvarado this past Saturday, his name was once again mentioned with Manny Pacquiao’s. The fights that Manny Pacquiao and Juan Manuel Marquez have had are some of the best ever in the history of the sport. Marquez vs Pacquiao has been, not only great for the fans, but also for the sport of boxing. Which leads one to question, does there really need to be a fifth fight?

Marquez vs Pacquiao is arguably the best rivalry in the sport of boxing. This rivalry has given the fans, and the sport four of the best fight’s that (in my opinion) anyone has ever seen. The reason this rivalry has spanned four fights is because it was controversial. The first three fights were scored a draw and two victories for Pacquiao. The reason for the controversy is, a lot of people though Marquez won all three of those fight.

In my opinion Marquez won two of the first three fights, especially the first one. In the first fight Pacquiao knocked Marquez down three times in the first round, but after that it was all Marquez. Marquez (in my opinion) won every single round after that first round. Marquez controlled the whole fight with his amazing counter punching and experience, but at the end of the fight the decision was a draw. The second fight (in my opinion) was the closest. Marquez and Pacquiao went back and forth the whole fight. Pacquiao used his amazing speed to go inside and land a few punches, and then back out. Marquez used his amazing counter punching, hand speed, and utilized his straight right hand very well. At the end of the fight Manny Pacquiao won by split decision.

The third fight picked up right where the last two left off, with a lot of action. The third fight was very close as well, but Pacquiao got the majority decision. The fourth fight (in my opinion) is the reason why a fifth fight is unnecessary. The fourth fight was turning out to be the best fight in this rivalry so far for Pacquiao. Pacquiao was dominating the fight with his speed and aggressiveness. In the 6th round though Pacquiao got careless, he felt like he hurt Marquez, he attacked Marquez with a fury of punches which allowed Marquez to set Pacquiao up with a straight right hand that knocked him out cold.

The reason there is no need for a fifth fight is because of the fourth fight. Juan Manuel Marquez final got the decision that he felt he deserved the first three times, and proved to boxing fans that he was the true victor all along. Marquez vs Pacquiao 5, for Manny Pacquiao there may be reason for a fifth fight, but for Marquez there is not.