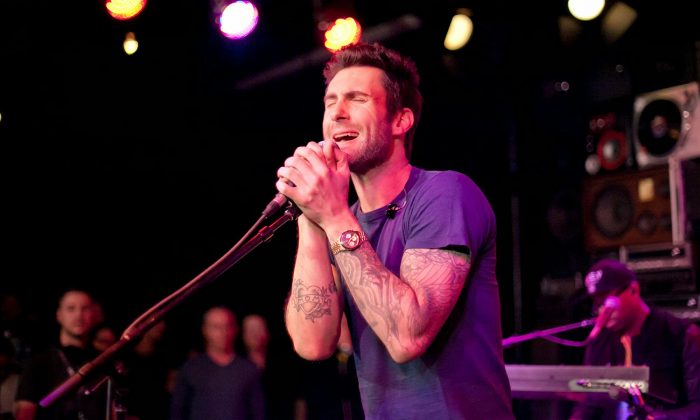 He went on Instagram and wrote a missive alongside an image of the “One Love” light display that was featured in the performance. “When we accepted the responsibility to perform at the SBHTS, I took out my pen and just wrote,” Levine, 39, said on Instagram.

He added: “Some of the words that came to me in that moment eventually made their way onto the incredible lanterns that flew high and low tonight. We thank the universe for this historic opportunity to play on the world’s biggest stage. We thank our fans for making our dreams possible. And we thank our critics for always pushing us to do better. One Love.”

The band received backlash from activists who are protesting the NFL because teams won’t sign quarterback Colin Kaepernick.

Days before the performance, Levine issued a statement of his band’s decision to perform during the halftime show.

“No one thought about it more than I did. No one put more thought and love into this than I did. … I spoke to many people, most importantly though, I silenced all the noise and listened to myself, and made my decision about how I felt,” he said.

wow the highlight of Adam Levine’s performance was definitely that his shirt looked exactly like pillows that an alarming amount of people happen to have from Target #SuperBowl pic.twitter.com/UL8WjdpJaY

“It’s a cop-out when you start talking about, ‘I’m not a politician; I’m just doing the music.’ Most of the musicians who have any kind of consciousness whatsoever understand what’s going on here,” he said.

“And once again, I like to think that people know where I stand as a human being after two decades doing this … I’m not a public speaker. I do speak but it’s through the music.

“My life’s work and what I put out into the universe has been positive and hopefully inspiring … So, what I would say is, you know, we are going to do what we keep on doing, hopefully without becoming politicians and continuing to use the one voice we know how to use properly,” the singer added, Yahoo reported.

Super Bowl national anthem singer Gladys Knight addressed the Kaepernick controversy in the days leading up to the Super Bowl.

“I am proud to use my voice to unite and represent our country in my hometown of Atlanta,” Knight told CBS News in a Feb 1 report.

NFL commissioner Roger Goodell again reiterated his stance that an NFL team would sign Kaepernick if they thought he would help them.

“I think if a team decides that Colin Kaepernick or any other player can help their team win, that’s what they’ll do,” Goodell said.

“They want to win, and they make those decisions individually in best interest of their club.”