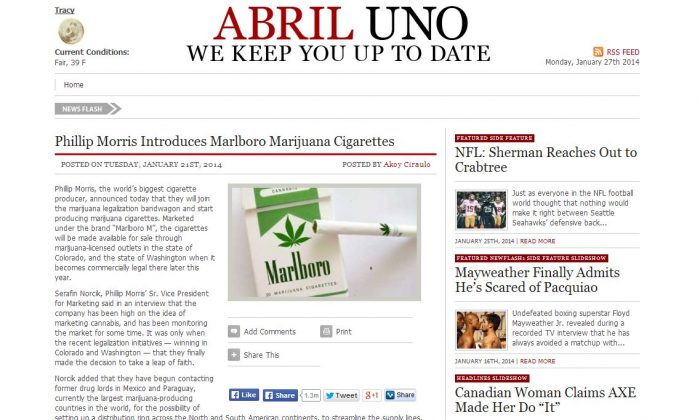 An article saying Philip Morris has introduced “Marlboro M” cigarettes filled with marijuana is from a satire news site, but it appears many believed it was real.

“Phillip Morris, the world’s biggest cigarette producer, announced today that they will join the marijuana legalization bandwagon and start producing marijuana cigarettes. Marketed under the brand ‘Marlboro M’, the cigarettes will be made available for sale through marijuana-licensed outlets in the state of Colorado, and the state of Washington when it becomes commercially legal there later this year,” the article reads.

It added that the company “have begun contacting former drug lords in Mexico and Paraguay.”

But at the bottom of the website, it indicates that it’s satire.

The disclaimer reads, “Abril Uno (April One, or April Fools in English) is a satire, parody and spoof web publication. Abril Uno uses invented names in all its stories, except in cases where public figures or companies are being satirized, parodied or spoofed. Any resemblance to the truth, actual events, actual persons, living or dead, is entirely coincidental and is intended purely as a satire, parody or spoof. All articles contained herein are fiction (“fake”), untrue, and for entertainment only.”

A good number of people believed it, but many also pointed out that it’s satire.

“It’s already treated with chemicals you dummies, just because the cigarette companies are getting involved doesn’t mean that they are going to treat it with more chemicals! You pothead are really dumb now, I can’t imagine how stupid y’all will be when they legalize it everywhere,” one commenter said in the website’s comments section.

Added another, “Only problem is is it just Marijuana or is is a mix of all the crap that is in normal cigs. I dont spoke at all, but if anyone reads i would recommend just getting your marijuana from some were else not a Cigarette company. They are gonna make the non addicting drug, the most addicting.”

Despite the website’s claims that it publishes satire, some thought the article simply wasn’t funny or clever.

“1. This story is obviously a spoof. 2. It is amazingly unfunny. All of the Onion-wanna-bes should just stop it,” said one commenter.