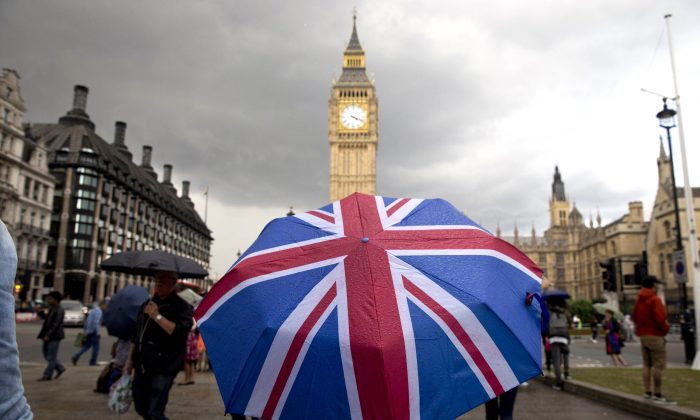 A pedestrian shelters from the rain beneath a Union flag themed umbrella as they walk near the Big Ben clock face and the Elizabeth Tower at the Houses of Parliament in central London on June 25, 2016. (Justin Tallis/AFP/Getty Images)
Business & Markets

After 72 hours there is nothing to change the minds of traders and investors who largely weren’t prepared for Brexit. So markets continue in a risk-off mode as more questions pop up and answers are sorely lacking.

It cannot be said that markets didn’t have time to prepare since British Prime Minister David Cameron promised a referendum on British EU membership in the beginning of 2013.

But the complexity of the different scenarios, including a second referendum and the modalities of how Britain will exit the EU were too much to stomach, so traders kept selling stocks, the British Pound, and the euro, while they stocked up on gold and government bonds.

The pound gave up all of its recovery on Friday and plunged to $1.32 in early Monday trading. The ratings agency Moody’s downgraded the outlook for British sovereign debt to negative, citing concerns over growth and the Budget deficit.

While it is true that Britain has a high budget deficit and it is unclear how much of its assets international investors want to buy in the future, government bonds actually rose in price. If the United States is any indication, bonds and even the currency don’t care that much about rating agencies, as both U.S. Treasurys and the U.S. Dollar continued to rally after the 2011 U.S. sovereign downgrade by S&P.

Ironically, the drop in the pound is seen as a negative while other countries like Japan and the European Union would be very happy to see their currency drop and have done everything in their power to do so. Well, at least the euro dropped 0.4 percent to 1.099 against the dollar.

Investors will feel more comfortable taking risks, as they realize this is mostly a UK political crisis and less a Eurozone or world panic.
— PD Shah, PDS Capital

Another currency that was down almost 1 percent in Asian trading: the Chinese yuan. It broke out of this year’s trading range spanning 6.45 to 6.60 against the dollar to 6.6544. However, the UK’s economic impact on China is limited. China may have taken the chance to devalue its currency secretly when not everybody is exclusively focused on Chinese capital outflows as it has been the case for most of this year.

Stocks across the globe took another hit. The British FTSE 100 index was down 2.6 percent in late London trading. To put things in perspective, however, it is only down 4.5 percent since trading started at the beginning of the year.

The U.S. S&P 500 lost 1.6 in early New York trading. Bank stocks were hit harder on both sides of the Atlantic with Bank of America losing 5 percent on Monday, down 27 percent for the year.

For shareholders of these big banks, this is not pretty. Banks just don’t like volatility. An event that creates volatility and hurts their derivatives book won’t do them any good. This is not the fault of Brexit, however. There was plenty of time to reduce risk and shore up capital, so this single event merely exposes the weakness and under capitalization of banks, similar to the Great Financial Crisis or the euro crisis.

Where there are losers, there are winners and some traders have positioned themselves well for this event. Gold extended its rally and is consolidating gains at $1320 per ounce. It serves as a store of value and is outside the banking system, so it won’t be affected by a meltdown in derivatives markets. Always a good reason to buy.

Likewise, gold mining stocks, including British ones, have been rising in the aftermath of Brexit. Traders also bought Bitcoin, the Yen, and the U.S. dollar in a bet to reduce risk until a clearer picture of the UK’s economic future emerges.

Veteran trader PD Shah thinks the worst could be over soon: “Gold, the U.S. Dollar, and developed market bonds should continue to be a safe haven until asset price volatility is sorted out. Investors will feel more comfortable taking risks, as they realize this is mostly a UK political crisis and less a Eurozone or world panic.”