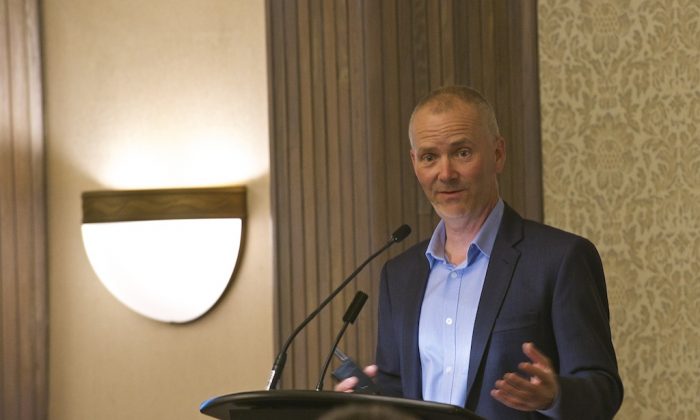 Mark Monahan, award-winning executive and artistic director of the RBC Royal Bank Bluesfest, speaks about the power of community involvement at the Eggs n’ Icons business breakfast hosted by the Ottawa Chamber of Commerce on June 5, 2014. Monahan won the Chamber’s Business Achievement Award in 2010, and was recognized by Le regroupement des gens d’affaires with an Executive of the Year award in 2011. He was included on a prestigious list of honorees to receive the Order of Ottawa in 2013. (Chrisy Trudeau/Epoch Times)
Canada

OTTAWA—On its 20th anniversary, Ottawa’s RBC Royal Bank Bluesfest has grown from a three-day, one-stage event, to an 11-day, multi-stage musical smorgasbord ranked by Billboard Magazine as one of the most successful outdoor festivals in the world.

The secret to that success, according to Bluesfest executive and artistic director Mark Monahan, is keeping your fans involved—all year long.

Bluesfest brings in the biggest and best of all genres of music, like this year’s lineup of Lady Gaga, Snoop Dogg, Queens of the Stone Age, Tegan and Sara, and the Barenaked Ladies, but Monahan thinks it takes more than that to retain a loyal following.

The festival hosts a variety of initiatives throughout the year to engage fans. Monahan believes these activities have a profound effect on the festival’s success.

They include the “Blues in the Schools” and “Be in the Band” programs, the Bluesfest School of Music & Art, the Festival House community arts hub, the “She’s The One” competition for emerging female artists, and an annual charity golf tournament.

The key is community involvement, specifically giving to the community over the long term in a meaningful way, which is like “setting the table” all year round, getting ready to serve up the main course.

Ads help when it’s time to sell tickets, but by then your customers have been prepped to buy. They’ve seen your organization around the community and are more likely to buy from the one they know and like, said Monahan.

Here are a few points from Monahan’s speech to business leaders at the Ottawa Chamber of Commerce Eggs n’ Icons breakfast on June 5:

Think about what your business has to offer that benefits the community. In Monahan’s case, that’s knowledge of blues music and the arts in general.

Consider community initiatives that tie into your business’s mandate. The “Blues in the Schools” program shares Bluefest’s values as well as helps to promote the festival.

Get the people you need to roll out your plan. Bluesfest emphasized building up and nurturing its volunteer base early on, and now has some 3,500 volunteers.

Think long term. Those students from the Bluesfest school program may not be buying tickets now, but they may likely be later on.

Be clear on why you do what you do. When Bluesfest pays local artists $100,000 to perform, it is to support the local music scene. But when it makes deals with Lady Gaga and other big names, the goal is to maximize profits on ticket sales.

Social media is all the rage, but Monahan said it is hard to manage and does not offer the same returns as making direct connections in the community and having a real impact on the people you want to do business with.

Bluesfest attracts as many as 300,000 fans every year.