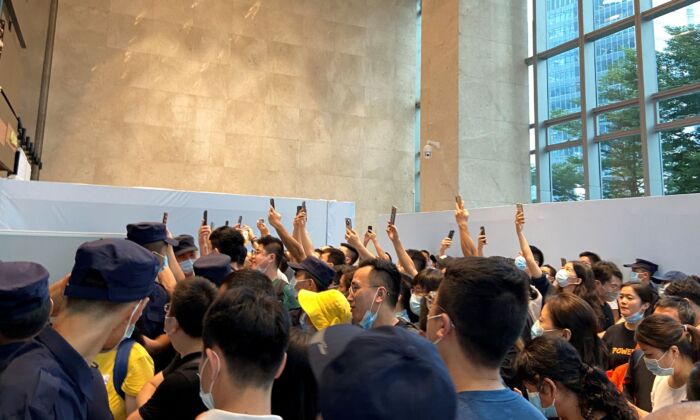 Rating agencies have further downgraded the credit rating of troubled Chinese housing giant Evergrande after the company disclosed the full extent of its financial problems. An expert has warned that a default could send shocks through the country’s property and banking industry.

On Sept. 15, U.S. rating agency S&P further downgraded Evergrande from “CCC” to “CC” with a negative outlook, citing reduced liquidity and default risks, including the possibility of the company undergoing debt restructuring.

The downgrade comes two days after Evergrande released a statement in Mandarin saying growing speculation about its impending bankruptcy was “completely untrue,” but conceded it had “indeed encountered unprecedented difficulties at present.”

Another rating agency, Fitch, published an update on Sept. 14 warning that if Evergrande defaulted it could expose numerous industries to heightened credit risk. However, the overall impact on the banking sector would be manageable, it said. Fitch downgraded the company’s rating to “CC” from “CCC+” on Sept. 7.

Near the end of June, Evergrande reported a massive 1.97 trillion yuan (US $305 billion) in liabilities, according to a draft of its first half-year report. This included 572 billion yuan ($88.8 billion) in bank loans and other borrowings.

On Sept. 14, the highly indebted property group revealed in a statement to the Hong Kong Stock Exchange that its cashflow was under “tremendous pressure.”

It has struggled to sell its properties and assets, including its Hong Kong-based headquarters, stakes in electric vehicle companies, and property service businesses, which it planned to use to pay off its crippling debt.

Evergrande’s sales had halved from June to August, imposing “tremendous pressure on the group’s cashflow and liquidity,” with the group blaming the weak performance on “ongoing negative media reports.”

The company disclosed that two of its subsidiaries had failed to uphold guarantee obligations for 934 million yuan ($145 million) worth of wealth management products issued by third parties.

Frank Tian Xie, professor of business at the University of South Carolina Aiken, said the debt crisis and suspension of repayments to investors suggested Evergrande faced a default and insolvency.

“[Banks] have rights to auction its assets based on their contract if it defaults, then Evergrande and its subsidiaries will go bankrupt and sell off properties,” Xie told The Epoch Times.

He warned that if Evergrande were to go bankrupt, would have knock-on effect for banks and developers.

Xie suggested it could pose a wider threat to the country’s debt-laden property sector, or even the financial system.

He added that the debt is now causing difficulty for the Chinese Communist Party (CCP). Even if authorities bailed out the group, it could unleash a domino effect on other sectors of China’s economy.

China’s National Bureau of Statistics said the impact on the country’s property sector was “under further observation,” when asked about Evergrande’s liquidity crisis at Wednesday’s press conference.

Complaints have flooded Chinese social media platforms as property buyers worry their projects could remain unfinished, leaving them without their pre-paid new homes. Investors have also called for their money back.

Since Sept. 12, angry investors have protested at the company’s Shenzhen headquarters, demanding the repayment of loans and financial products. Despite attempts by security guards and police to disperse the crowds, around 40 protesters still remain.

Reuters and Luo Ya contributed to this report.