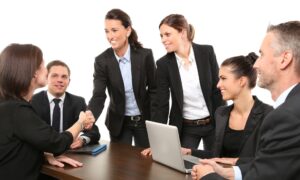 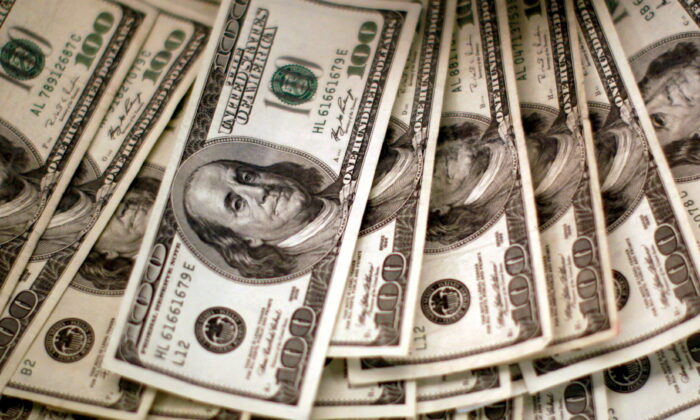 U.S. dollars are counted out by a banker counting currency at a bank in Westminster, Colo., on Nov. 3, 2009. (Rick Wilking/Reuters)
Market Watch

The dollar started the week on a firm footing, with investors looking toward a flurry of economic data releases this week, including the key U.S. consumer inflation number that will factor into the Fed’s decision on tapering of stimulus.

Market expectations around a quicker timeline for the Federal Reserve to begin paring its massive bond-buying program are a likely factor buoying the greenback.

“The U.S. dollar’s recent rebound has coincided with more hawkish comments from Fed Presidents,” FX analysts at MUFG said in a note.

A number of U.S. economic data releases are due out this week, including a small business activity survey from the National Federation of Independent Business (NFIB) and the closely watched consumer price index (CPI) inflation figure, which will be published on Sept. 14.

The CPI inflation measure vaulted 5.4 percent in the 12 months through July, matching the June figure, which was the highest 12-month spike since 2008, according to the most recent consumer price index report from the Labor Department. Economists polled by Reuters expect year-over-year consumer inflation to come in at a softer 4.2 percent. At the same time, CPI rose 0.5 percent in July from June, lower than the previous monthly increase of 0.9 percent, suggesting peak inflation may have passed.

Wells Fargo analysts said in a note that they expect a further slowdown in the monthly consumer inflation number to 0.4 percent from July to August, though they cautioned against viewing the drop as a sign of sharp easing of inflationary pressures.

“A softer monthly print should not be taken as an indication that inflation is quickly fading back to its anemic pre-COVID pace,” the analysts wrote in a note, as cited by FXStreet. “The initial stage of reopening may be behind us, but the economy remains in transition mode. Until inventories are rebuilt and workers return to the labor market in greater numbers, inflation is set to remain elevated. The duration of ‘transitory’ continues to lengthen.”

Federal Reserve officials have maintained that the current bout of inflation is transitory and will fade once pandemic-related dislocations abate.

Meanwhile, the producer price index jumped by 8.3 percent over the year in August, the biggest 12-month increase on record that reinforced broader concerns about inflation as higher production costs are often passed along to consumers.

While the elevated manufacturing price data suggests consumers are more likely to see prices rise in the future, Federal Reserve officials have repeatedly said they believe consumer price increases are transitory, with the expectation that inflation will eventually moderate back to the central bank’s longer-run average target of 2 percent.

Fed officials have also said the ultra-easy monetary settings will stay in place until they see a more solid labor market recovery, although they have acknowledged inflationary pressures and are discussing when to begin pulling back on the central bank’s extraordinary support measures for the economy.

Last year, the Fed cut its benchmark overnight interest rate to near zero and began buying $120 billion in treasuries and mortgage-backed securities each month to bolster the economic recovery.