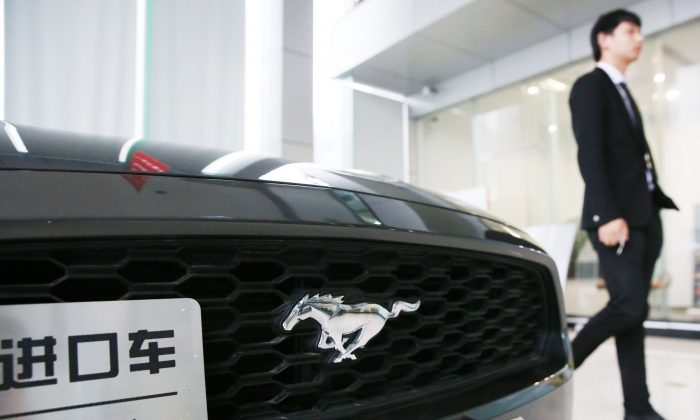 An imported American Ford Mustang is displayed in a showroom in Nantong City, Jiangsu Province, China, on May 22, 2018. (AFP/Getty Images)
China Business & Economy

China is the world’s most populous country and its second-biggest economy. The Chinese market is vital to top international brands, and many companies seek to do business there.

But foreign companies increasingly find themselves having to make sacrifices, cede to unreasonable demands, and navigate an increasingly hostile economic and legal environment to operate in China.

A motivating factor behind President Donald Trump’s recent escalation of trade tensions with China has been what the Trump administration deems to be China’s “economic aggression” in recent years. While the method to combat such behavior can be debated, experts across the political spectrum recognize that China doesn’t play by the rules in global trade and commerce.

“Much of [China’s] growth has been achieved in significant part through aggressive acts, policies, and practices that fall outside of global norms and rules,” said a June report by the White House Office of Trade and Manufacturing Policy. It discusses the extent of China’s “economic aggression” and how it threatens innovation of U.S. companies, and by extension, America’s economic future.

Around 46 percent of U.S. companies operating in China believe that “foreign companies are treated unfairly compared to local companies,” according to the latest annual business climate survey conducted by the American Chamber of Commerce in China, “with some members asserting that they are more likely to undergo tax audits or reviews of work permits or visas than local rivals.”

While businesses generally strike a positive tone in public comments about China, companies do complain to the government or media through back channels, fearing retribution from the Chinese communist regime, according to a report published in March by the Office of the U.S. Trade Representative (USTR).

Around 50 U.S. lawmakers wrote a letter to China’s U.S. ambassador, Cui Tiankai, last year complaining about China’s data storage restrictions on cloud-computing service providers, according to a Wall Street Journal report. It’s no coincidence that several of the lawmakers who had the harshest words hailed from the states of Washington and Virginia, where cloud-computing giants Microsoft Corp. and Amazon.com Inc. have substantial operations.

“We do not believe that foreign-invested companies generally should be required to promote the development of any political party within company structures,” the statement said.

In certain sectors, such as autos, the CCP only allows foreign companies to operate through joint ventures with Chinese partners, with local partners holding majority ownership. This is a main strategy the CCP utilizes to force foreign automakers to hand over key electric-vehicle technologies to Chinese companies, according to the USTR report.

Firms refusing to do so can instead import their cars, but will incur hefty tariffs on their goods.

Electric automaker Tesla Motors is currently in such a predicament. Tesla desperately wants to increase sales in China, the world’s No. 2 auto market and the fastest-growing market for electric vehicles.

In fiscal year 2017, revenues from China accounted for only 17 percent of its total revenues. Year-to-date through May, Tesla was barely able to crack the top 20 in electric vehicles sold in China, with its Model X SUV at No. 19 with 4,758 units sold.

But Tesla founder and CEO Elon Musk does not want to share its innovative electric powertrain technologies with any Chinese partners. It contemplated building a wholly owned production factory inside Shanghai’s Free Trade Zone, but its cars would still be subject to import tariffs because it would be located inside the free trade zone.

In the company’s most recent earnings call on April 26, Musk hinted that Tesla may be able to announce a new “gigafactory in China soon,” potentially reaching a favorable deal with a Chinese partner and skirting onerous tariffs.

More than two months have passed without an announcement, raising fears among Tesla investors that Beijing may have delayed approvals for a Tesla factory due to increasing trade hostilities between the United States and China.

Watch What You Say

Dozens of international airlines—including U.S.-based carriers such as American Airlines and Delta—were told by the CCP in May to remove any public information that could suggest Taiwan, Hong Kong, or Macau are independent from China. The Trump administration called such demands “Orwellian nonsense.”

In January, China temporarily banned hotel chain Marriott’s website and app after it listed Taiwan, Hong Kong, Macau, and Tibet as individual countries on its website and mobile app.

Toeing the Party line in China is something American companies must do on a daily basis.

What’s particularly alarming is that the CCP is targeting foreign companies’ websites and apps in general—intended for an international audience—and not just local websites and apps facing mainland Chinese consumers. By submitting to Beijing’s demands, Western companies are essentially letting the CCP dictate their business policies outside China’s borders.

The warning to airlines is believed to be part of Beijing’s new “social credit system.” The program assigns a “trustworthiness” score to individuals and now, apparently, foreign companies on how much the individual or company’s views align with the CCP’s own. The score can be used to blacklist and punish foreign companies the CCP deems to be offenders.

While this is a delicate situation for companies and governments to navigate, the rest of the world also cannot deny the gravity of such transgressions against free trade and markets.

“Democratic governments can’t force firms to refuse to comply with Beijing’s demands, but they also shouldn’t leave businesses alone to mitigate risks that are created by the Chinese state’s actions,” said Dr. Samantha Hoffman in a June report by the Australian Strategic Policy Institute.

In March, the Shanghai Administration for Industry and Commerce issued a fine to the Shanghai store of Japanese retailer Muji’s of 200,000 yuan ($30,140) over a cardboard box of hangers that was marked with “Taiwan” as its country of origin.

Thus in 2018, even a cardboard box can’t escape the long shadow of the CCP.