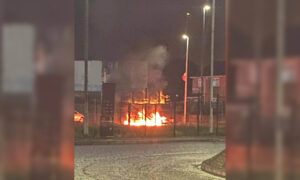 Mark Pollock – Paralysis cure may be in Sight

Fresh from his recent 10-week trip to the USA where he was part of an experiment with UCLA scientists, Mark Pollock believes a cure for paralysis is on the horizon.

Mark was a world class rower when he lost his sight at the age of 22. However, he continued to compete and even went on to become the first blind man to reach the South Pole in 2009. In 2010, however, he suffered a fall that left him paralysed. He has since worked tirelessly to regain his mobility with the help of exoskeletons and robotic legs.

Speaking about the new electrical implant, Mark said, “It’s in four humans already [the electrical stimulus device] and the research money is going into it. It’s the first translated technology in the cure area in this whole paralysis space. So it’s kind of a really, really big breakthrough.”

In the short term, the type of device developed recently is going into patients with spinal injuries much higher up than Mark’s. This is because the implant needs to be located away from the injured area, and the location where they are currently implanting is where Mark’s spine was damaged. However, this has not deterred his optimism.

“We are working with the Reeve foundation helping to raise money with them for that implant, though I’m not going to directly benefit from it at this point in time. But because it’s such an exciting project I want to support that initiative, because it is a technology that can get into people with very high injuries and make an impact on their lives, and hopefully very quickly. It has some more research to go but I think the more they do on that area I suspect it will translate into some of the lower injuries,” said Mark.

Mark Pollock is now a member of the board of the Reeve Foundation. The group of scientists he is collaborating with at UCLA are led by V. Reggie Edgerton, Professor of integrative biology, physiology and neurobiology, and Yury Gerasimenko, PhD, of St. Petersburg’s Pavlov Institute’s. These scientists are funded by the Reeve Foundation and recently published research in Brain, a peer-reviewed scientific journal of neurology. The research was with respect to electrical stimulation implanted in the spine.

“The work I’m doing at UCLA is kind of a parallel strand to that research, so if guys with high injuries can get cures before me it doesn’t really matter. If some group of paralysed people can get some victories over paralysis then I think that’s going to be a good thing, and I’m really keen to support that,” said Mark.

Mark says he and his team have been trying to work out what role they can fill with the Mark Pollock Trust. “Beyond just getting me out of hospital and getting me set up, there are lots of foundations and scientists and physiologists and technologists all working on a cure for spinal injury, and we have tried to sit in this area to connect some of those people.”

Mark says he aims to get foundations talking to each other—to get the robotics gurus talking to the neurological scientists, because he believes they tend not to cross over very often.

What Mark and the Foundation have been doing is to see if he could get the most out of what he had, and to try and see if he could get anything going below the level of his injury. “A lot of that was mimicking the walking movement and whenever the robot came along I was able to get up and walk in it. I’ve gone through 250,000 steps in the robot, but those two interventions I have kind of maximised what I had available to me, and now we are crossing over the line into seeing what we can add in to try and find a cure. So the progression has gone from being so badly ill in hospital to getting out there and seeing what I had available, to walking in the robot, to now trying to add in the exploring for the cure with interventions that are translatable fairly quickly into humans, so we are not in a biology lab under a microscope—it’s stuff that’s out there and imminently available,” said Mark.

The big things for Mark are the kidney infections. They have become less frequent than they were, and he’s not entirely sure if that’s to do with his exercise regime. Mark has also managed to keep a reasonable amount of muscle mass in his legs, which is not the norm for persons with spinal cord injuries. “I’m sweating in my legs, which is a good sign! If I get a nick or a graze on the skin of my legs, it heals up very quickly…I can’t say that that is due to my exercise, but it’s still my hunch that it’s better to keep blood flowing around the body and keep exercising than it is to remain in the chair the whole time.”

“It’s pretty difficult when we plateau. There was a period there last year in the robot when we were doing around 400 steps every ten minutes…we stayed at that point for ages and ages, but now we are doing around 550 steps in ten minutes, and we do them in blocks of ten minutes. I find that when we plateau for a period of time, you think: What’s next? Are we making any progress? It’s like any kind of training regime,” he said.

The trust has evolved from supporting one individual—Mark Pollock. Now its agenda is to find collaborative projects. “Our mission now is to find and connect people around the world to fast-track a cure for paralysis. We are really starting to do that now. Over the next year or two we will make a lot more progress in that area. What I would say about the trust is that it’s evolving, and you can go to www.markpollocktrust.org to find out more,” said Mark.