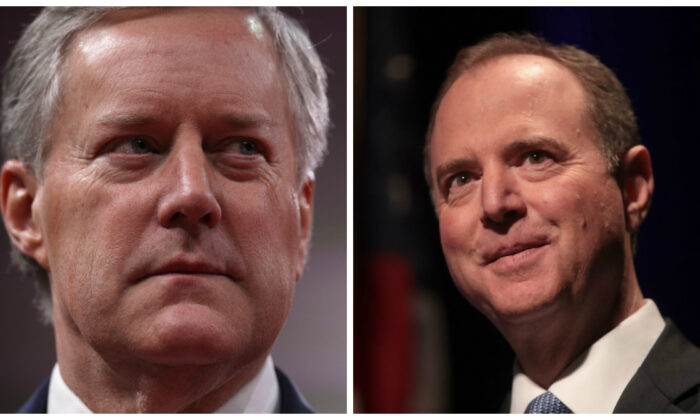 The so-called whistleblower passed on secondhand information and details from media reports in the complaint, which largely focused on Trump’s July phone call with Ukrainian President Volodymyr Zelensky. The call transcript was released by the White House shortly after House Speaker Nancy Pelosi (D-Calif.) announced an impeachment inquiry into Trump.

Trump asked Zelensky to look into former Vice President Joe Biden’s actions in the country, as well as Biden’s son Hunter Biden, who sat on the board of Ukrainian energy company Burisma for five years until earlier this year. The transcript doesn’t show Trump pressuring Zelensky or offering anything in exchange.

Schiff initially said the whistleblower would testify to Congress but backed away from that assertion over the weekend.

“Given that we already have the call record, we don’t need the whistleblower, who wasn’t on the call, to tell us what took place during the call,” Schiff said. “We have the best evidence of that.”

Meadows said late Oct. 15 that Schiff must call the whistleblower to testify, accusing the House Intelligence chairman of avoiding bringing people in for depositions who might present evidence he doesn’t want to hear.

“[Rep.] Jim [Jordan] and I have been now in over 40 hours of deposition and what we’re finding is that Adam Schiff only wants to have witnesses who will give the response that he hopes they will give—and even at that it’s a swing and a miss,” Meadows said during an appearance on Fox News’s “Hannity.”

Reports emerged earlier this month indicating Schiff’s committee had contact with the person who filed the complaint before the complaint was filed, leading to Schiff twice expressing regret for saying in mid-September, “We have not spoken directly with the whistleblower.”

The contact was reportedly not disclosed to the Inspector General of the Intelligence Community, Michael Atkinson, who found indications of political bias “in favor of a rival political candidate” on the part of the whistleblower.

Mark Zaid, one of the attorneys representing the whistleblower, told The Epoch Times that the complaint was drafted by themselves.

“To be unequivocally clear, no member or congressional staff had any input into or reviewed the complaint before it was submitted to the Intelligence Community Inspector General,” he said.

Meadows said on Tuesday the whistleblower needs to answer questions about the contact with Schiff’s committee.

“We call it a whistleblower but it’s really more an anonymous informant—we need to have them come in so that we can say, ‘How often did you coordinate with Adam Schiff?’,” he said.