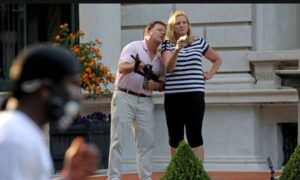 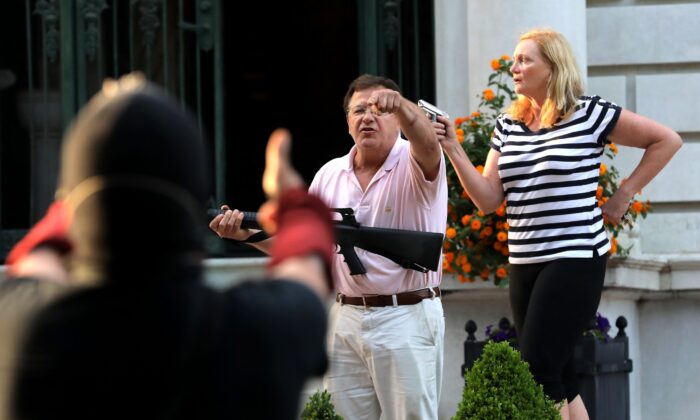 Armed homeowners Mark and Patricia McCloskey, stand in front their house along Portland Place to confront protesters in the Central West End of St. Louis, Mo., on June 28, 2020. (Laurie Skrivan/St. Louis Post-Dispatch via AP)
US Features

Mark McCloskey Opens Up to The Epoch Times: ‘The Power Resides in the People’

Last summer, the George Floyd riots didn’t just bring death and damage to the city of St. Louis, it made Mark and Patricia McCloskey famous. The Epoch Times was able to sit down with Mr. McCloskey and go over his journey into politics.

He opened up a bit more about what happened after he and his wife brandished their guns at their home when a mob of activists trespassed into their gated community on June 28, 2020. “They came back the following Friday on July the third with the specific intent of killing us and burning down our house. That was the more difficult of the 2 events. That didn’t make the press because the optics weren’t good for the peaceful protesters narrative.”

“The big lie that’s been told by the mainstream media from the very beginning is that these were peaceful protesters that took a wrong turn on their way to the Mayor’s house and that we went out and assaulted them. But these ‘peaceful protesters’ on the nights of June first and second last year, burned down downtown St. Louis, shot 4 police officers … killed retired police captain David Dorn.”

He detailed how rioters burned down a 7-11, Walgreens, and various other businesses. “These rioters turned very violent very fast, and the police had been ordered to stand down,” McCloskey noted how they realized they were on their own with no one to protect them.

McCloskey was eager to discuss the current state of the city. “The cops are understaffed, underpaid, and the government here just doesn’t support them.” He noted how St. Louis has changed. “We have 20 times the murder rate of New York City when New York’s having a bad year, and what’s the solution of our new mayor Tishaura Jones: Defund the police. I think they arrested 250 or so people during the riots on [June] first and second. She let them all out.”

The city of St. Louis was seeking felony charges against the McCloskeys. These have now been dropped and replaced with misdemeanor charges, which McCloskey is ready to accept. “The new charge against me was that I purposely placed other people in apprehension of immediate physical injury, and I’m thinking, hell, that’s what the guns were for, right?” he laughed.

But this is not where the story ends. Mark McCloskey is now running for a Senate seat in Missouri with the hopes of inspiring others across the nation to stand up for what they believe in. “When Roy Blunt announced that he was not gonna run for re-election, people started asking whether or not I had an interest in it. You know, I’ve been a life-long Republican but I‘ve never had any particular desire to run for office. In fact, if you asked me a year ago today what I wanted most in the world I’d say for the world to leave me the heck alone. I like peace and comfort. But the world chose differently. And … it became kind of a calling.”

He joked about the events that led to his decision and explained his faith in a higher calling. “I didn’t think that having three to five hundred angry rioters break down my gate was a good thing, but maybe in the long run it will turn out that way.”

He then pointed out, “I was the first lawyer in the country to file a lawsuit against a school on Critical Race Theory. But just teaching kids to hate themselves, and hate their history, hate their country, and to finally parse out by race, and a selection of gender identities and all these different things to treat everybody differently rather than everybody equally, that’s just so corrosive, and it’s all based on basic Marxism. Instead of having class envy, now you have race envy.”

When asked if he had anything to say to Americans who may have misunderstood him over the past year, he said, “I’m not the typical lawyer. I didn’t go from high school to college and college to law school. Although I did that, but I mean, when I got out of high school I didn’t immediately go to college. I started working when I was fifteen. I worked on a riverboat as a deckhand when I was fifteen. By the time I was sixteen I was an engineer on an excursion boat. I worked as an auto mechanic, I’ve farmed, I’ve welded, I’ve been kind of a hands-on guy my whole life, and even during the time I’ve been a lawyer for the last thirty-seven years, I still do auto-mechanics. I still fix my own cars. I built one of my cars myself.”

The Epoch Times does not endorse nor take a position on political candidates.