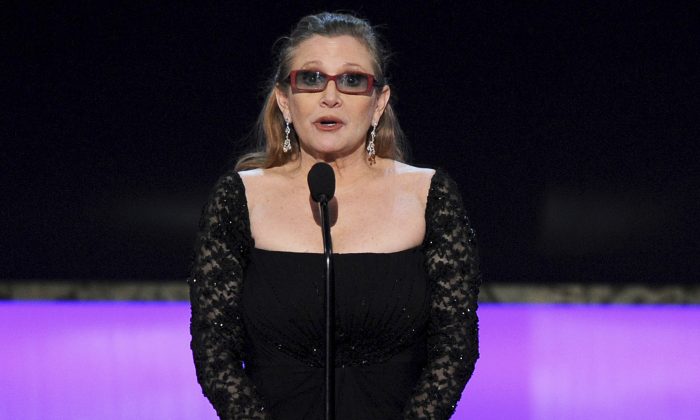 In this Sunday, Jan. 25, 2015 file photo, Carrie Fisher presents the life achievement award on stage at the 21st annual Screen Actors Guild Awards at the Shrine Auditorium in Los Angeles. Fisher has reportedly been transported to a hospital after suffering a severe medical emergency on a flight Friday, Dec. 23, 2016. (Photo by Vince Bucci/Invision/AP, File)
Entertainment

Harrison Ford has released a statement after his “Star Wars” co-star Carrie Fisher was hospitalized after suffering a heart attack on a plane on Friday evening.

In the statement, Ford, who played Han Solo, said he was “shocked and saddened” about Fisher, who starred as Princess Leia.

“I’m shocked and saddened to hear the news about my dear friend,” Ford told The Hollywood Reporter. “Our thoughts are with Carrie, her family and friends.”

Luke Skywalker actor Mark Hamill, meanwhile wrote on Twitter: “As if 2016 couldn’t get any worse… sending all our love to @carrieffisher.”

Fisher suffered a “cardiac episode” while on a Los Angeles-bound flight. She’s currently in the UCLA Medical Center’s intensive care unit. When the plane landed, nurses performed CPR on her at the airport.

Todd Fisher, her brother, told Entertainment Tonight: “We certainly do not know her condition, that’s why she is in ICU. I’m sure everyone wants to speculate, but now is not the time for that. If everyone could just pray for her that would be good.”

In another interview with AP, Todd Fisher said she’s receiving “excellent care.” Adding, “We don’t know. We hope for the best. We certainly do not know her condition, that’s why she is in ICU. I’m sure everyone wants to speculate, but now is not the time for that,” according to People magazine.

Her daughter Billie Lourd and dog Gary were seen at the hospital on Friday, TMZ reported, adding that Fisher is reportedly on a ventilator.