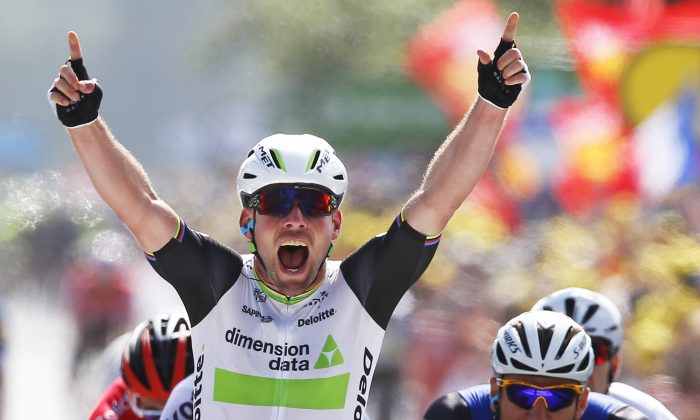 Mark Cavendish of Team Dimension Data earned his 27th stage win in the first stage of the 2016 Tour de France, taking the race leader’s yellow jersey for the first time in his career.

Mark Cavendish of Team Dimension Data earned himself his 27th stage win in the first stage of the 2016 Tour de France, taking the race leader’s yellow jersey for the first time in n his career.

The first stage of the 2016 Tour de France was a straightforward flat stage, 188 kilometers from Mont-Saint-Michel to Utah Beach, one of the landing beaches used by the Allies on D-Day, June 6, 1944.

The stage was expected all along to end in a sprint, with a breakaway being caught in the final kilometers and the sprinters’ teams contesting the win.

Voss dropped back to the other two after the climbs; this trio was joined by Alex Howes (Cannondale) and Anthony Delapace (Fortuneo-Vital Concept) 28 km from start.

This group was allowed to stay away through most of the stage, shrinking until only Howse and Delaplace were left. This pair was caught five km from the finish.

No team was able to take control of the race entering the final kilometer. Only Dimension Data, riding for Mark Cavendish, managed to get a few riders in a row, while several pairs of riders battled for space at the front.

A crash just behind the leaders thinned out the pack at the 600-meter mark. About 300 meters out World Champion Peter Sagan broke free from the remaining riders in a solo bid for the stage win.

Sagan opened a gap, but he had started too early; Etixx-Quick Step sprinter Marcel Kittel waited for another fifty meters before accelerating, with Lotto-Soudal’s André Greipel chasing his wheel. Just as Kittel caught Sagan, Cavendish lit his afterburner, swooping past all three to take his 27th Tour de France stage win and the leader’s yellow jersey for the first time in his career.

Cavendish, once the dominant sprinter in the sport, had been struggling through the past few years. He changed his training, moving back to sprinting on the track; he also rejoined his longtime favorite leadout man, Mark Renshaw. Cavendish, now 31, looked like the Manx Missile of old, accelerating so quickly the rest of the world’s best sprinters looked slow.

The win moved Cavendish to within one of Bernhard Hinault and within six of record holder Eddy Merckx, Cavendish could easily move into second this year.

Sagan held on for third, narrowly edging out André Greipel. Sagan will likely bring the yellow jersey back to the Tinkoff team in Stage Two, which features an uphill finish.

The stage was marked by a few other crashes, only one of which could have important consequences. Alberto Contador was run over by Sky’s Luke Rowe, bringing the Tinkoff team leader down hard on his right side. Contador got some care at the medical car (and a new right shoe from his team car) and proceeded on apparently untroubled, though a team mate said after the race that Contador’s elbow was swollen.