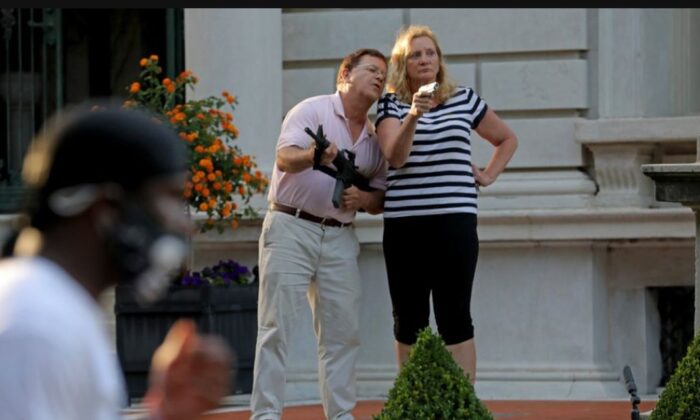 Mark and Patricia McCloskey stand in front of their house holding firearms as activists walk through the gated neighborhood in the Central West End of St. Louis, Mo., on June 28, 2020. (Laurie Skrivan/St. Louis Post-Dispatch via AP)
By Jack Phillips

More notably, however, the two will be forced to forfeit the weapons they were holding when they confronted BLM protesters who were marching near their home last summer.

On Thursday evening, following the guilty pleas, Mark McCloskey told Newsmax why the couple pleaded the way they did.

“[Prosecutors] dropped all the felony charges, all the gun charges, and charged me with a crime that said I purposely placed other people in apprehension of imminent fear of physical injury—and, by God, I did it,” McCloskey said.

The two have claimed in media interviews that the protesters were trespassing and noted that Black Lives Matter protesters in St. Louis and other cities have committed arson and have engaged in acts of violence. The couple previously pleaded not guilty and were slated to go to trial in November of this year.

The BLM protesters told them “that they were going to kill us,” said Patricia McCloskey last year.

But Richard Callahan, a local prosecutor, alleged that some of their claims were unfounded.

“There was no evidence that any of [the protesters] had a weapon and no one I interviewed realized they had ventured into a private enclave,” he said in a statement on Thursday.

The couple gained popularity among conservatives after photos taken by media outlets last year showed Mark McCloskey, who was wearing a pink polo shirt and holding a rifle, and Patricia McCloskey, who was holding a small silver handgun, outside their property in front of dozens of protesters.

The McCloskeys later appeared at the Republican National Convention and endorsed President Donald Trump for reelection. Mark McCloskey has since launched a campaign to run for Missouri’s Senate seat.

In May, when announcing his campaign, he wrote: “An angry mob marched to destroy my home and kill my family, I took a stand to defend them. I am a proven fighter against the mob … When the mob comes to destroy our home, our state, our nation—I’ll defend it.”

He wrote: “I will NEVER BACK DOWN … Help me FIGHT BACK.”

The Epoch Times has contacted Mark McCloskey for comment on the guilty pleas.