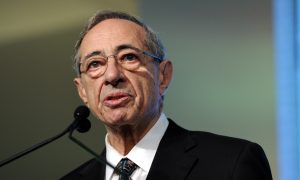 Former New York Gov. Mario Cuomo, who died last week, is being remembered as a big-spending liberal Democrat—and he certainly did plenty to earn that reputation. During his three terms between 1983 and 1995, Cuomo significantly expanded the state government’s payroll, doubled the size of the state’s budget, and more than doubled the state’s debt.

Yet Cuomo’s record can’t be reduced to tax, spend, and tax some more. In fact, even as he was gaining national acclaim among Democrats for his attacks on the fiscal policies of President Ronald Reagan, Cuomo also approved personal income tax cuts that were downright Reaganesque.

The personal income tax has long been New York’s main state revenue source, and the double-digit tax rates imposed in the 1960s and early 1970s under Republican Gov. Nelson Rockefeller struck a huge blow to the state’s economic competitiveness. Democratic Gov. Hugh Carey, under whom Cuomo served as lieutenant governor from 1979 to 1983, began to undo the damage by slashing the state’s top income tax rate to 10 percent from its 15.35 percent Rockefeller-era reform.

Cuomo’s third budget, presented in 1985, called for $1.2 billion in new income tax cuts, which included a further reduction in the top rate, to 9 percent from 10 percent. “This will enhance our business environment by helping us attract and retain middle-level managers,” Cuomo said. Prodded by state Senate Republicans, he enlarged the package to include a reduction in New York’s tax on “unearned” income, including capital gains. The governor pronounced himself “very pleased” with the result. More was soon to come.

In 1986, Reagan and a bipartisan congressional coalition agreed to an historic tax reform that reduced federal individual income tax rates, while broadening the income tax base through the elimination of loopholes, tax shelters, and deductions. Because New York’s own income tax was tightly integrated with the federal tax code, Washington’s changes effectively demanded adjustments by Albany. If the state had done nothing, the result would have been a significant “windfall” state tax increase, estimated at $1.7 billion to $2.3 billion. At the same time, the Reagan economic boom was yielding a bumper crop of tax receipts for Albany, consistently exceeding budget projections, even as Cuomo allowed spending to grow at the fastest rate since Rockefeller’s profligate heyday.

The Legislature—including Assembly Democrats as well as Senate Republicans—wanted to do much more. Cuomo ultimately yielded, signing a package designed to cut income taxes by another $4.5 billion over five years, including a net reduction of $2.2 billion beyond the federal windfall offset. The governor called the basic elements “acceptable” and “good for the people of the state”—though his heart didn’t seem fully in it.

The combination of tax cuts and large spending increases in the late 1980s was clearly unsustainable, and the bottom fell out of the state’s finances when New York’s economy began to slump at the end of the decade. That’s when Cuomo’s tax policies reversed course for good. The governor halted planned income tax reductions in 1989, after the first two phases of the 1987 law had been implemented, and kept postponing them annually through the five years he had left in office. During the same period, he hiked taxes on incomes above $100,000 a year and slapped a 15 percent surcharge on all business taxes.

By the time Cuomo left office at the end of 1994, New York’s overall state tax burden relative to personal income was slightly higher than it had been when he became governor—and local taxes, heavily influenced by state mandates, were higher still. New York woefully underperformed the national economy during Mario Cuomo’s 12 years as governor, adding new private jobs at less than one-third the national rate. More than 100,000 residents of New York moved to other states each year.

Cuomo’s Republican successor, George Pataki, pushed through a $4.6 billion annual income tax cut that brought down New York’s top rate to 6.9 percent and lightened middle-class burdens by more than 25 percent. Some of these changes had been included in the tax package that Cuomo had signed into law but then derailed before it could be fully implemented. Bolstered by Mayor Rudolph Giuliani’s policies in New York City, the state’s economy briefly pulled even with the national rate of job growth at the end of the 1990s, though the loss of people to other states continued almost unabated.

Fast forward to 2015: under a “temporary” tax hike twice extended by Gov. Andrew Cuomo, the state’s top income tax rate on million-dollar earners is back above 8.8 percent, the highest level since Mario Cuomo’s second term, while the burden on the middle class is (also temporarily) slightly lower than Pataki left it.

Like all political records, Mario Cuomo’s needs to be considered in historical context. Twenty-eight years ago, even the most liberal New York City Democrats in the state Assembly had signed on to a plan calling for a low, flat income tax, and they ultimately managed to tug the liberal governor a good ways toward their goal. Today, many of their political heirs would be happy to boost income taxes back to Rockefeller’s double-digit levels—if the current Gov. Cuomo would only let them.

Andrew Cuomo, in sharp contrast to his father’s budget-busting first-term, has allowed very little state spending growth after adjusting for inflation, and he has continued to emphasize tax cuts as an economic and fiscal priority. Last year, he initiated a significant corporate tax reform and rate reduction, coupled with a reduction in estate taxes. He also pushed through a cap on local property tax levies, something it’s difficult to imagine his father even considering.

Yet, comparing Mario Cuomo’s completed first term to Andrew Cuomo’s, the father still comes out ahead on the tax-reduction front: the broad-based personal income tax cut permanently enacted in 1985 was significantly larger than the “temporary” and targeted cuts enacted during the current governor’s first four years in office.

If Andrew Cuomo can continue to hold the line on spending, make his tax cap permanent, and emulate the most pro-growth elements of his father’s second-term tax policies, his economic legacy will be far more positive in the long run.