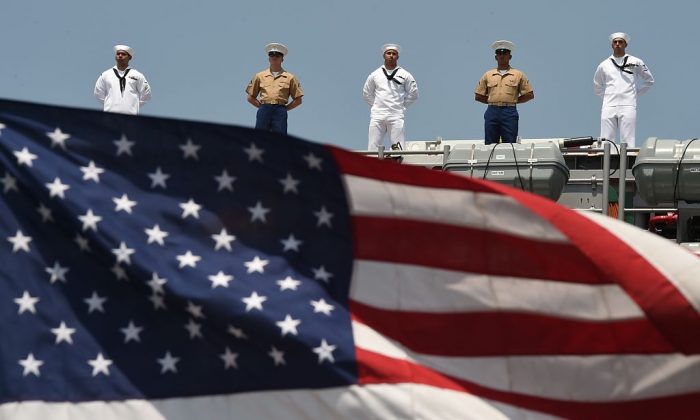 The US Flag blows in the wind as Sailors and Marines stand on the deck of the USS Bataan (LHD 5) as it arrives into Pier 88 during the 'Parade of Ships' ceremony to kick off Fleet Week in New York on May 25, 2016. Thousands of sailors, marines and Coast Guardsmen from the US Navy and US Coast Guard as well as from international navy ships attend the celebrations. / AFP / TIMOTHY A. CLARY (Photo credit should read TIMOTHY A. CLARY/AFP/Getty Images)
US

COLUMBIA, S.C.—The Marine Corps is considering possible punishments and potential courts-martial for up to 20 officers and enlisted leaders following investigations into the suicide of a 20-year-old recruit at its Parris Island training facility in South Carolina.

The results of three investigations released Thursday found trainees—and even some drill instructors—were subjected to repeated verbal and physical abuse at the storied training site. It also faulted commanders for paying insufficient attention to what was going on.

The investigations were sparked by the death of Raheel Siddiqui of Taylor, Michigan, a young Muslim who had told his relatives he wanted to become a Marine to serve his country. He died after falling nearly 40 feet in a stairwell.

An attorney for Siddiqui’s family, Shiraz Khan, released a statement to the Detroit Free Press Thursday saying he and the family are reviewing the findings.

“There are too many questions that remain unanswered. We will work with NCIS (Naval Criminal Investigative Service) as they move forward with their investigation.”

Some of the 20 commanders and senior enlisted leaders have already been fired, including the three most senior Marines in charge of the recruit’s unit. The Marines also ordered that the rest be temporarily relieved, according to a statement sent to The Associated Press. Discipline could range from administrative punishments, such as counseling, to the most severe action of military charges and courts-martial.

No formal charges have been filed. Under military law, a preliminary hearing must be held that will determine whether the incident warrants further administrative or judicial action in every individual’s case. That process could take weeks to months, and the individuals would not be identified unless they are formally charged.

The findings are the result of three investigations conducted over the past six months by Maj. Gen. James Lukeman from the service’s training and education command.

A redacted investigative report did not mention Siddiqui by name but appeared to describe his death. It says that on March 18, the day Siddiqui died, an unnamed recruit wrote a note to his drill instructor asking to go to the infirmary for a sore throat. Because he didn’t follow proper procedure, the recruit was forced to run back and forth in his barracks, the report said.

About 500 drill instructors are assigned to the Parris Island post. It’s the only site where female Marines go through basic training, but they are trained in units separate from their male counterparts. All recruits from east of the Mississippi River train at the massive installation.

The report said Lukeman’s command has also taken steps to review and revise the Corps’ approach to mental health issues and its handling of potential issues or statements by personnel involving suicide.

The statement said immediate steps have been taken to enforce a “zero-tolerance” approach to hazing, and called for increased oversight of training activities by additional Marine Corps officers.

The report said the investigation found the abuse was confined to Siddiqui’s battalion at Parris Island, but the ordered changes to policy will apply to all battalions at Parris Island and the Marine Corps’ West Coast training facility in San Diego.

The Michigan congresswoman who pressed the Marine Corps to look into Siddiqui’s death said the service has taken only the first step in helping his family get answers it deserves. Rep. Debbie Dingell, D-Michigan, said she is visiting the South Carolina site this weekend to review changes the service has made in light of Siddiqui’s death, and to make sure those found responsible are held accountable.

“As a young Muslim man, he truly understood the value of freedom of religion and all he wanted was to defend the ideals our nation holds dear,” Dingell said in a statement.