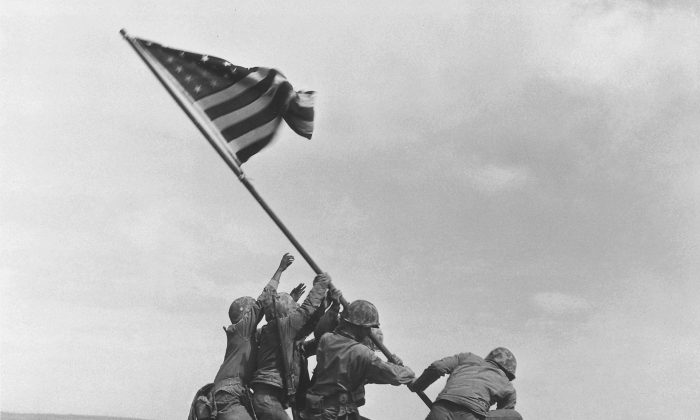 FILE - In this Feb 23, 1945 file photo, U.S. Marines of the 28th Regiment, 5th Division, raise the American flag atop Mt. Suribachi, Iwo Jima, Japan. The Marines Corps announced Thursday, June 23, 2016, that one of the six men long identified in the iconic World War II photograph was actually not in the image. A panel found that Private First Class Harold Schultz, of Detroit, was in the photo and that Navy Pharmacist's Mate 2nd Class John Bradley wasn't in the image. Bradley had participated in an earlier flag-raising on Mount Suribachi. (AP Photo/Joe Rosenthal, File)
US

The events in the photo took place on Iwo Jima, a volcanic island due south of Tokyo. The U.S. invaded Iwo Jima on Feb. 19, 1945 in World War II, and the battle of Iwo Jima is considered one of the bloodiest in Marine Corps history.

The flag raising in the photograph took place on Feb. 23, 1945, five days after the battle began. The purpose of the raising the flag was to signal to U.S. troops that Mt. Suribachi had been secured. Two groups of men were used to raise the flag.

The flag raised by the first group was too small, leading to a request for a second group of men, who were captured in the iconic photograph.

The photograph become popular very quickly, appearing on newspapers across the United States after it was published, as well as on postage stamps and War Bond posters.

However, a few months ago the Marine Corps stated that researchers working on a Smithsonian Channel documentary on the photo approached the marines and suggested that one of the men in the photo may have been misidentified.

This prompted Marine Corps commander, Gen. Robert Neller to form a review panel. On May 4 the Marine Corps posted a Facebook post: “As such, with the information and research provided by the Smithsonian Channel, who used advanced digital technology to examine battle footage, the Marine corps decided to review their photo-enhancements, film analysis, and findings.”

The panel has since come to a conclusion.

The Marine Corps say that they now believe that rather than Navy Pharmacist’s Mate 2nd Class John Bradley, it was Private First Class Harold Schultz from Detroit, Michigan, in Rosenthal’s image. Bradley had been involved in the initial flag raising instead.

“Our history is important to us, and we have a responsibility to ensure it’s right,” Neller said.

“Although the Rosenthal image is iconic and significant, to Marines it’s not about the individuals and never has been,” according to Neller. “Simply stated, our fighting spirit is captured in that frame, and it remains a symbol of the tremendous accomplishments of our Corps — what they did together and what they represent remains most important. That doesn’t change.”