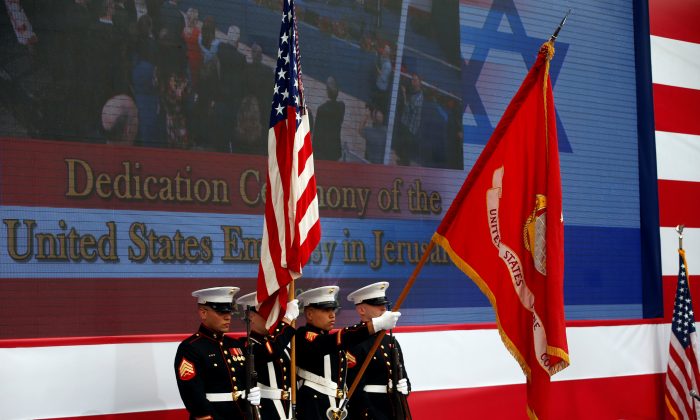 U.S. Marines take part in the dedication ceremony of the new U.S. Embassy in Jerusalem, on May 14, 2018. (Ronen Zvulun/Reuters)
US News

Marine Shot and Killed on Duty at Marine Barracks in Washington

A U.S. Marine was shot and killed in a Washington barracks on New Year’s Day, it was reported.

Marine Corps officials confirmed the Marine died while on duty at Marine Barracks Washington, according to the corps’s website. It happened at 5 a.m. on Jan. 1.

The Marine’s name has not yet been released pending the notification of family.

The shooting is currently under investigation by Washington D.C. police, officials said.

“The command’s priorities are to take care of the Marine’s family and friends,” Col. Don Tomich, commanding officer of Marine Barracks, said in a statement. “We want to ensure these personnel are being provided for during this challenging time.”

Capt. Colleen McFadden, a Marine Barracks Washington spokeswoman, didn’t reveal whether any foul play was involved in the Marine’s death. She also didn’t disclose if it was an accidental discharge. Meanwhile, she didn’t elaborate on whether other Marines were injured, according to Military.com.

“The command and the Marines here are cooperating with the investigation team, which is the Metropolitan Police Department, at the time,” McFadden said, according to Miliary.com.

No suspects have been arrested in the shooting, and there is no threat to the public, Fox5 reported.

Following the shooting, officials stated that “due to an unforeseen tragedy at Marine Barracks Washington this morning, today’s New Year’s Serenade is canceled,” according to WJLA-TV.

The barracks is located at Eighth and I Street in Washington. It’s the oldest active post in the entire Marine Corps.

On June 15, 2018, another Marine was shot at Marine Barracks Washington, suffering nonlife-threatening injuries from a “self-inflicted gunshot wound.”

In Florida, the FBI said that Jacksonville, Miami, Orlando, Tampa, Hialeah, Tallahassee, and St. Petersburg are the most violent cities, according to WTXL. Jacksonville recorded 106 murders in 2016, the last available data, Orlando had 84 murders, and Miami saw 55 murders. Meanwhile, Tallahassee is considered the 10th-worst city in the United States when it comes to property crime rates, the FBI said, reported FloridaPolitics in June 2018. There were 52 property crimes per 1,000 residents in the state’s capital city.