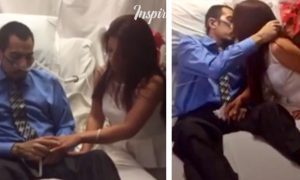 There can never be enough appreciation shown to those who put their life on the line every day to serve their country day in and day out. Justin being a prime example serving in the military as a marine, like many others serving their country he has had to sacrifice normal day to day activities which many of us take for granted.

Both Justin and his wife Tori knew that they would be separated from time to time, because of his role. The dangers of serving, and the potential risk to his life were always in the back of their minds. They knew they would have to make sacrifices when it came to their home and family life, so for that very reason, Justin and Tory made the decision to postpone starting a family until Justin returned home for good.

With all this planning the unexpected happened, and like most plans, this plan didn’t go the way they expected at all. They were pregnant, at the exact time Justin had to return to the military.

No one can begin to imagine how they must have felt unless they were in a similar situation. These two new parents had to face the unknown thousands of miles away from each other, without a clue what each day would bring.

Despite the distance, and how incredibly hard this would have been for both Tori and Justin they battled through and found ways to turn what felt like a really bad situation into an unforgettable and amazing experience.

Tori sent scan photos and ultrasound videos ensuring Justin was by her side every step of the way. The courage they both had to show is remarkable, but particularly for Justin who cleaved to his family, to the daily and weekly updates of his daughter’s development that strengthened him tremendously. They even Skyped the birth of their beautiful baby girl, allowing Justin to be part of that very moment his little girl entered the world.

After 6 long months of separation, Justin is finally allowed to returned home to the girls he loved the most. The reunion in itself captured in this video is such a humbling one, but the instant love Justin shows his baby girl is just breathtaking, and indescribable.

The appreciation is shown for one another when, in their interview Tori said, “everything feels perfect and complete again” with Justin stating, “it’s definitely nice to be home.” The subtle appreciation they each showed for each other throughout the video, is so beautiful. This family is a great example of many families across the United States that are separated temporarily through service and protecting their country.

And after everything they’ve been through, against all odds, despite separation the love made their reuniting feel like they were never separated in the first place.