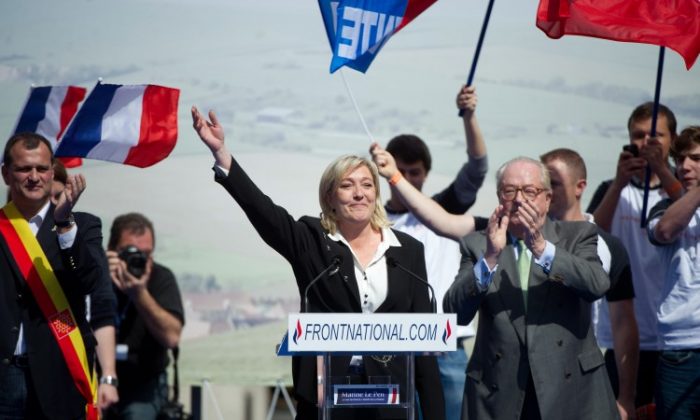 Marine Le Pen, the French far-right presidential candidate, said she would not support President Nicolas Sarkozy in his tight bid for reelection, delivering a crushing blow to the president in the last week of the race.

Sarkozy, the conservative incumbent, is squaring off with Socialist Party challenger François Hollande in a runoff election on Sunday.

Le Pen was the upstart “winner” on the first ballot on April 22, garnering 18 percent of the vote—the best showing ever for the populist National Front. It wasn’t enough for her to make it to the second round, but it put her in a position to be kingmaker, depending where she threw her support in the final round.

Instead of choosing either candidate, Le Pen declared her support for no one and told her supporters to vote as they wish.

“I shall grant neither my trust, nor a mandate to those two candidates. On Sunday, I will vote blank,” Le Pen said, according to France 24 news.

Le Pen added, “On May 6, it is not a president who will be elected, but merely another employee of the European Central Bank, a subordinate of the financial system in Brussels.”

The National Front wants to see France exit the eurozone, and is generally critical of Sarkozy’s foreign policy.

Le Pen also takes a much harder line on immigration and the so-called Islamization of France than the president, although Sarkozy has been moving much further right on the issue in a bid to woo voters.

According to Timothy Hellwig, a specialist in European politics and mass political behavior at Indiana University-Bloomington, Le Pen and the National Front may like Sarkozy’s anti-immigrant rhetoric, but see him as ultimately ineffective.

How National Front voters cast their ballots is “the key question in determining the outcome of the election,” wrote Hellwig via email. According to recent polls, Hollande has a 6- to 10-point lead over Sarkozy.

“They are Sarkozy’s last real hope. But I anticipate a victory for Hollande,” wrote Hellwig.

This likely has to do with Le Pen’s strategy looking ahead to National Assembly elections in June. After her strong showing on April 22, Le Pen will be hoping to build on that momentum and win seats in the Legislature for the first time since 1986.

To do this, she’ll have to take support from Sarkozy and consolidate the right, which will be a much easier task if Sarkozy is out of office.