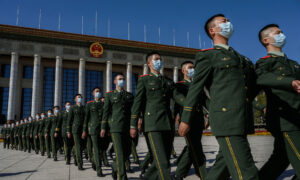 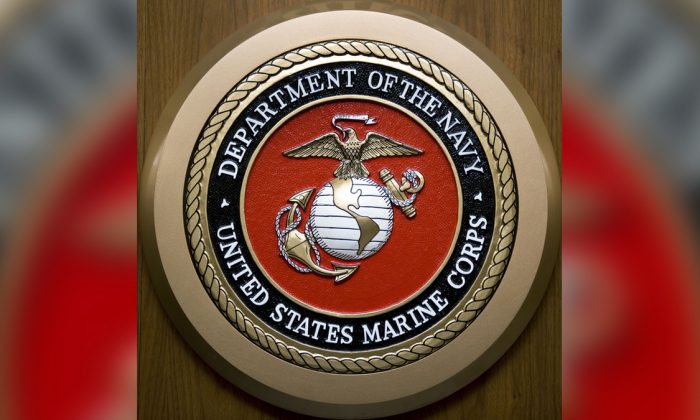 The U.S. Department of the Navy, U.S. Marine Corps, seal hangs on the wall at the Pentagon in Washington on Feb. 24, 2009. (Paul J. Richards/AFP/Getty Images)
US News

An official Twitter account of one U.S. Marine Corps (USMC) command posted a streak of apologetic messages after its earlier derisive comments targeting a conservative commentator and an apparently random civilian prompted a dose of criticism.

Carlson juxtaposed the Chinese communist regime addressing a lack of masculinity in Chinese boys as well as amassing the world’s largest Navy fleet with the Biden administration’s focus on accommodating women in the military.

In a recent speech Biden went over the efforts, such as tailoring uniforms specifically for women, designing “maternity flight suits,” and relaxing hairstyle regulations.

“Some of it’s going to take an intensity of purpose and mission to really change the culture and habits that caused women to leave the military,” Biden said.

Carlson commented: “So we’ve got new hairstyles and maternity flight suits. Pregnant women are going to fight our wars. It’s a mockery of the U.S. military.”

While some interpreted the segment as criticizing the administration for distracting the military from its warfighting mission, others interpreted it as Carlson opposing women’s playing a role in the military.

On March 12, the Twitter account of II Marine Expeditionary Force Information Group posted a picture of a female Marine carrying a fellow Marine.

“What it looks like in current armed forces @TuckerCarlson,” the post said. “Get right before you get left, boomer.”

The tweet prompted a mixed response. Some people praised it for supporting women in uniform. Others found it unprofessional.

“Please focus on China and not Tucker Carlson,” one user commented.

The USMC account came back with a reply, “Come back when you’ve served and been pregnant.”

“Please focus on China and not me,” the user responded.

Virginia Kruta, a Daily Caller editor who had two children while serving in the Army, backed Carlson.

“Tucker’s point was that the priority should always be mission first—and the current administration is telegraphing a very different set of priorities,” she said in a tweet. “At no point did he say that pregnant women shouldn’t serve or couldn’t serve honorably.”

The Daily Caller was co-founded by Carlson.

As the critical comments piled up, the USMC account responded:

“We are human and we messed up. We intended to speak up for female Marines and it was an effort to support them. They are a crucial part to our corps and we need them to know that. We will adjust fire and ensure the utmost professionalism in our tweets.”

In another post it said: “We’ve strayed away from our brand and realize that. Our standard practices will be in effect and you can count on us to correct our mistake going forward.”

Yet another said: “We are here to train, fight and win. That tweet was intended to defend our women in uniform. We understand it was aggressive and we will reflect and do better.”

The II Marine Expeditionary Force Information Group is a regimental level whose job is “to provide administrative, training, legal, operational and Area Commander support” to USMC personnel and their families, according to its Facebook page.

The USMC didn’t immediately respond to a request for comment.

In a March 11 video post on Twitter he interpreted Carlson’s comments as arguing that pregnant women in the military make it “less lethal, less fit, and less ready.”

He said the military allows female troops to “have more time with their children, to recuperate, to get fit and ready, take that time that’s necessary that our medical professionals know that’s needed, which actually makes us a more lethal, ready, and fit force.”

Kruta pointed out that such accommodations are the “luxury” the military can provide thanks to its “manpower and resources to allow pregnant service members to care for themselves and their babies without taking away from the overall mission.”

“The reason we have that is that we have thus far not allowed our priorities—mission readiness and strength in combat—to be fully compromised by a focus on issues that are irrelevant to the purpose of winning wars,” she said in a March 12 op-ed.

“All Carlson did was warn Americans that those priorities—if President Joe Biden’s recent comments are any indication—are in danger of being compromised. And he is absolutely correct in that assessment.”

Carlson further chided the administration for the recent announcement that the Pentagon would pay for gender reassignment surgery for active-duty personnel.

“Here’s a reminder: the U.S. military exists to fight and win wars. That’s its only purpose. The U.S. military is not an NGO. It is not a vehicle for achieving ‘equity.’ It’s not a social experiment. It’s definitely not an employment agency. Nobody has a God-given right to work in the military. No one does, and that includes all of us.”