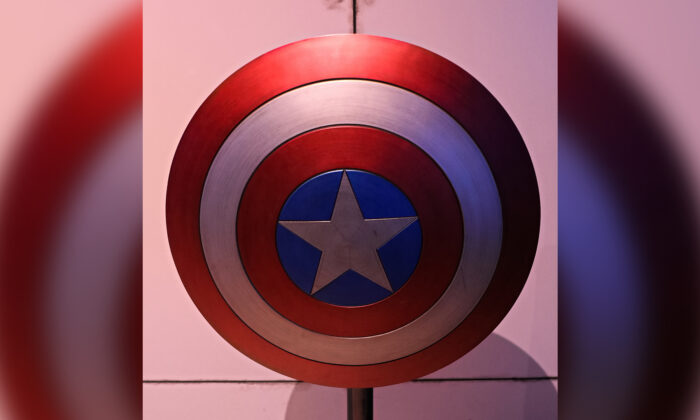 The red, white and blue shield handled by Chris Evans’ Captain America in the 2012 superhero blockbuster, “The Avengers,” sold for $200,000 at Julien’s Auctions in Los Angeles on June 18, 2022. (Dreamstime/TNS)
Entertainment News

A white-and-sheer gown worn by Monroe in the 1954 musical-comedy “There’s No Business Like Show Business” was the priciest of the 1,700 items sold during four-day “Hollywood Legends” event, fetching $218,750.

That winning bid blew past the $80,000 to $100,000 price range estimated by Julien’s Auctions, which organized the event in Los Angeles.

Other top sellers included the red, white, and blue shield handled by Chris Evans’ Captain America in the 2012 superhero blockbuster “The Avengers,” which went for $200,000.

Monroe’s dress was one of more than 100 items used by or belonging to the late Hollywood star that were up for auction during the weekend.

A sequin leotard worn by Monroe in “Gentlemen Prefer Blondes” sold for $102,400 in conjunction with Jane Russell’s matching costume in the 1953 movie. That price was more in line with the expectation of Julien’s Auctions, which projected an $80,000 to $100,000 winning bid.

Monroe died in Los Angeles in 1962 at age 36. The auction was announced on June 1, which would have been her 96th birthday.

“Marilyn Monroe lives on forever as the quintessential Hollywood Legend whose historical and cultural impact will continue to be celebrated in the next millennium and beyond,” Martin Nolan, the executive director of Julien’s Auctions, said last month.

Julien’s Auctions teamed up with Turner Classic Movies for the event to sell some of the film industry’s most-recognizable items.

Other sales included an ensemble worn by Audrey Hepburn in “Breakfast at Tiffany’s” for $156,250, a broomstick used in “Harry Potter and the Chamber of Secrets” for $76,800, and a cape donned by Christopher Reeve in “Superman III” for $51,200.