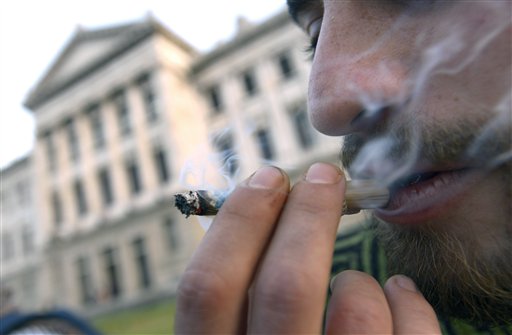 A new marijuana poll shows that for the first time, the majority of Americans favor legalizing the drug.

The poll by Gallup of 1,028 adults found that 58 percent say the drug should be legalized.

The issue has increasingly been in the public eye as states such as Colorado and Washington have pursued and achieved new regulations amid a reluctance by the federal government to change its official stance.

“Success at the ballot box in the past year in Colorado and Washington may have increased Americans’ tolerance for marijuana legalization,” according to Gallup. “Support for legalization has jumped 10 percentage points since last November and the legal momentum shows no sign of abating. Last week, California’s second-highest elected official, Lt. Gov. Gavin Newsom, said that pot should be legal in the Golden State, and advocates of legalization are poised to introduce a statewide referendum in 2014 to legalize the drug.”

Meanwhile, although the Obama administration hasn’t officially changed its stance, the Justice Department said in late August that it wouldn’t challenge the legality of Colorado’s and Washington’s referendums legalizing the drug’s sale and distribution.

Broken down with age groups, the younger a person is, the more likely he or she favors legalization. In the poll that was:

“With Americans’ support for legalization quadrupling since 1969, and localities on the East Coast such as Portland, Maine, considering a symbolic referendum to legalize marijuana, it is clear that interest in this drug and these issues will remain elevated in the foreseeable future,” Gallup predicts.

The poll was conducted through telephone interviews and the results have a sampling error of plus or minus four percentage points. Interviews for primarily Spanish-speaking U.S. residents were conducted in Spanish.