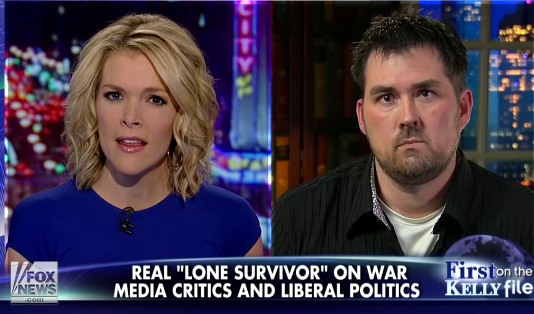 Marcus Luttrell, the former Navy SEAL whose story is presented in “Lone Survivor,” has hit back against critics of the new movie, which is currently in theaters.

Critics have called the movie pro-war propaganda and said that it has too much violence.

Luttrell told Megyn Kelly on Fox News that “There’s nothing glorious about war.”

The film follows four Navy SEALS who refuse to kill sheepherders in Afghanistan who stumble upon their hiding place, which leads to an intense series of skirmishes with Afghan militants. In real life, Luttrell made it out of the situation alive, and wrote a book about his experience before the movie was made.

Luttrell said that the men and women in the military risk their lives for their country.

“Bottom line is that there’s bad people everywhere. And every now and again we are going to have to step to them to make sure that we preserve our way of life,” Luttrell said “It’s people like my teammates and I that have to do that, and the men and women in the military. But there’s nothing glorious about it, there’s nothing pro-war — nobody wants war, it’s the most horrible thing in the world.”

Luttrell added that the movie shows the brotherhood in the Navy SEALs, as all four men were willing to die for one another. It also shows how there are good people everywhere, he said, noting that an Afghan village helped protect him during the intense situation.

Criticism from the movie has come from a variety of places, including during an interview with CNN, where host Jake Tapper called the deaths of the SEALs in the 2005 operation “senseless.” Tapper said that he felt “hopelessness” while watching the “horrific” situation showing the operation going wrong.

Lutrell took offense to these terms. “We spend our whole lives training to defend this country, and then we were sent over there by this country,” Luttrell responded. “And you’re telling me because we were over there doing what we were told by our country that it was senseless and my guys died for nothing?”

Tapper later defended his words on Twitter, saying that he “spent years reporting on heroes like these,” and “clearly I wasn’t saying they died for nothing.”

Another piece of criticism came from a review in LA Weekly, which prompted BlazeTV host Glenn Beck to offer to pay the writer if she read her review to Luttrell in person.