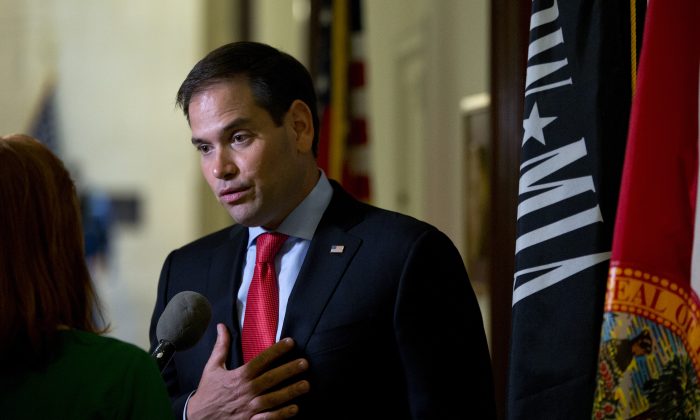 Sen. Marco Rubio, R-Fla., speaks to media outside his office on Capitol Hill in Washington, on June 22, 2016. (Carolyn Kaster/AP Photo)
US News

In a Tuesday morning tweet storm, the 2016 presidential candidate accused 2020 Democrats of trampling on America’s constitutional norms, arguing that the proposal is politically motivated.

“The Democrat plan to get rid of the Electoral College has nothing to do with making sure every vote counts,” Rubio said. “It’s about diminishing the electoral power of what liberals arrogantly call the ‘flyover states’ & of Americans they habitually disrespect as uneducated & backwards.”

#ElectoralCollege was work of genius by founders. It requires candidates for President to earn votes from various parts of country. And it makes sure interests of less populated areas aren’t ignored at the expense of densely populated areas.

Ironically same people always preaching about our “constitutional norms” want to change the ones they find inconvenient.

In addition to getting rid of #ElectoralCollege they also want to pack #SCOTUS.

I will soon file a bill to prevent this court packing scheme.

Twelve states have passed laws mandating that their electoral college votes go to the winner of the national popular vote, although all of them are solid blue states.