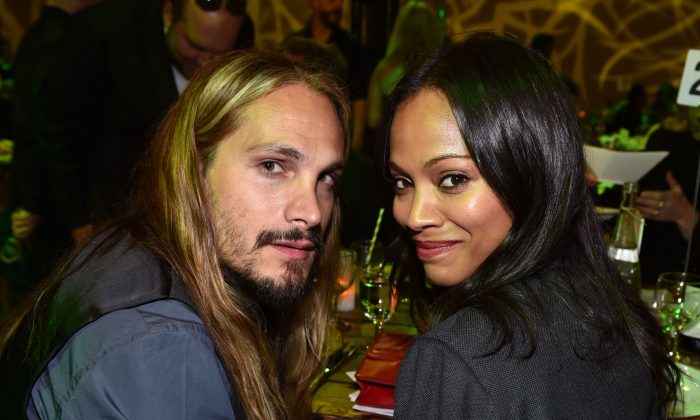 Zoe Saldana is in the news today because a source told Us Weekly that she’s pregnant and wants to have a big family with husband Marco Perego.

Not a whole lot is known about Perego, though some information has been revealed over the years. The Italian artist is 35 or 36.

Perego, who played professional soccer before he became an artist, told the New York Observer in 2007 that an injury cut short his career and prompted a move to New York City to pursue his dreams.

“I was living Spanish Harlem without money and I was living on 104 Street,” said Perego between sips of espresso. “I busboy, waiter, teach soccer.”

His big break came when he convinced Gilda Moratti, a sister of a friend and part of the famed Moratti family who works at Sotheby’s, to come see his art.

“One day what happened was, I come to her and I say, ‘Listen, look at my work, tell me what you think. If it is a joke I will try to find something else,” he said. “And always, I think, in my life, like Oscar Wilde would say: ‘We all from the same gutter, but some of us look at the stars.'”

He also started selling art in Italy, and pieces were all selling in one day. Then London, then Manhattan. His pieces now sell for tens of thousands of dollars in top venues in the city.

Perego also makes Saldana happy. A source told E! News when they were first romantically linked that Perego is “a really good guy” and another said that “Zoe is super-happy right now.”

Saldana recently told Marie Claire about her relationship with Perego: “I don’t do the ABCs. I do what my heart says, what my heart feels. So from the moment I met my husband, we were together. We knew.”