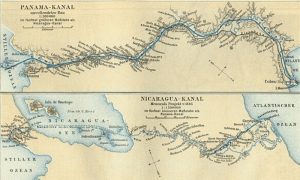 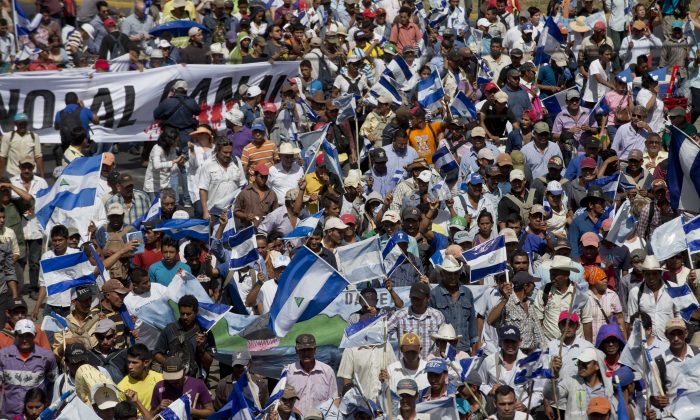 People takes part in a national march against the construction of the planned Nicaraguan interoceanic canal, in Managua, Nicaragua, Wednesday, Dec. 10, 2014. Building of the first phase of the multi-billion dollar, 173-mile canal starts on Dec. 22. (AP Photo/Esteban Felix)
Americas

MANAGUA, Nicaragua—Several thousand people marched through the Nicaraguan capital Wednesday to protest a planned $50 billion inter-oceanic canal project that has residents of some villages fearing they will be displaced.

Demonstrators waved flags, chanted anti-government slogans and shot homemade rockets in the air as they marched to United Nations offices in Managua on the anniversary of the 1948 Universal Declaration of Human Rights.

“Your lands belong to you,” Vilma Nunez, president of the Nicaraguan Center for Human Rights, told the crowd.

Officials said in late November that the canal will have minimal impact on the environment and society but have not yet made their studies public. Officials say it will be an economic boom for one of the region’s poorest nations, with at least 50,000 jobs directly related to the construction.

Groundbreaking is scheduled for Dec. 22.

Communities along the canal route have protested with increased vehemence in recent weeks. Tens of thousands of people worry their property will be taken over to make way for the canal, and possibly without fair compensation.

“I’m here because they want to take our lands to build the canal, but we are not prepared to give them up. We are going to fight for them with our lives,” said Julio Benavides, who traveled about 150 miles (250 kilometers) from rural San Miguelito in one of more than a dozen jam-packed trucks.

Protesters complained of harassment apparently aimed at making it difficult to reach the capital, including purported threats to pull the licenses of truck drivers who drove them.

“We have no reason to keep people from marching,” Talavera said. “We know there are people who do not agree. They are people who believe they will be hurt, when in reality they will benefit from the canal because it is a work of progress for everyone.”

The trans-oceanic canal is projected to span about 173 miles (278 kilometers) from the Caribbean to the Pacific.